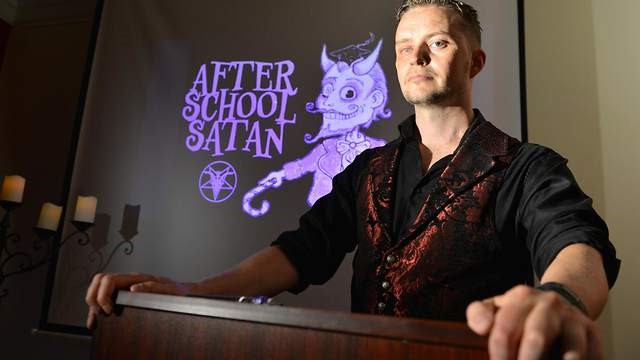 Having read the recent news about The Satanic Temple’s “After School Satan Clubs,” it was a privilege for me to have Lucien Greaves take some of his time to speak about these Clubs.

UnitedCoR: The media has really been rattled with the “After School Satan Club. (ASSC)” How many schools have approved the Club?

Lucien Greaves: Three so far: one in Utah, one in Los Angeles and one in Seattle. We just need to provide them with our liability insurance, which we are in the process of doing right now.

UnitedCoR: How many schools have you approached for an ASSC?

Lucien Greaves: About nine. They’re all “going through their requirements” for after school programs to make sure our ASSC fits the criteria.

UnitedCoR: Have you experienced any problems from schools thus far?

Lucien Greaves: Yes, in Tucson, Arizona. They denied ASSC behind a closed door session because “….they suggested the club does not currently meet the minimum requirement of having a faculty sponsor for the operation of any student club on a Tucson Unified School District campus,” a spokesperson from Christian Daily recently said. Michael Hicks, a member of the Tucson Unified School District, and a devout Christian had this to say about his school district’s actions: “The discussion by the Board of the TUSD as to whether or not to allow the Temple to host a school-sponsored activity would take place during the executive session. This is unusual,” Hicks explained, “because every other school board session to discuss extracurricular has been open for teachers, parents and students to attend.” Hicks doesn’t currently know why exactly the Board has chosen to have an executive session as opposed to a private session. My reply to him was that “We have discovered, while getting ready to legally fight this decision that the Tucson Unified School District ends school one hour prior to release to send the students to the Good News Club”.

UnitedCoR: How is it possible to get a faculty sponsor for an ASSC when they hold the meeting behind closed doors?

UnitedCoR: What other things are you working on for the Satanic Temple?

Lucien Greaves: Arkansas is almost ready to move forward with their Ten Commandments statue. The American History and Heritage Foundation stated in the application that “…the monument commemorates the Ten Commandments, an important component of the foundation of the laws and legal system of the United States of America and the state of Arkansas.” This November, the voters will have a question as to whether or not the clause in the Arkansas State Constitution that bans religious paraphernalia on State property.

UnitedCoR: How will The Satanic Temple react if this statue of the Ten Commandments goes up?