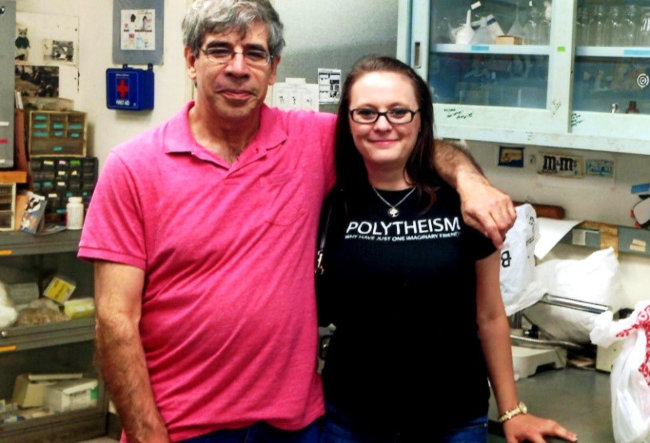 As many of my friends know, I’ve just returned to university and as science is my major, people like Dr. Jerry Coyne are an inspiration to me. Dr. Jerry A. Coyne is a Professor in the Department of Ecology and Evolution at the University of Chicago and a member of both the Committee on Genetics and the Committee on Evolutionary Biology. Coyne received a B.S. in Biology from the College of William and Mary. He then earned a Ph.D. in evolutionary biology at Harvard University in 1978, working in the laboratory of Richard Lewontin. After a postdoctoral fellowship in Timothy Prout’s laboratory at The University of California at Davis, he took his first academic position as assistant professor in the Department of Zoology at The University of Maryland. He joined the faculty of The University of Chicago in 1996.

Dr. Coyne has written over 115 refereed scientific papers and 130 other articles, book reviews, and columns, as well as a scholarly book about his field (Speciation, co-authored with H. Allen Orr). He is a frequent contributor to The New Republic, The Times Literary Supplement, and other popular periodicals. Dr. Coyne was also the recipient of the Richard Dawkins Award in 2015, which is given each year by the Atheist Alliance of America, and was the keynote speaker at the American Humanist Association’s 75th Anniversary conference this past May.

He generously agreed to an interview.

UnitedCoR: Since you have retired from the Ecology and Evolution department of the University of Chicago, what have you been doing with your time? Any new books in the future?

Dr. Jerry Coyne: (laughs) It’s harder to retire than I thought. I still go to work every day at 5:30 am. Right now, I’m finishing up my last scientific paper of my career. I’m also authoring two books: One is a children’s book about a guy I met in India named Mr. Dos who has 50 cats and another Oxford World Press book from the series “Very Short Introduction” on speciation for the educated lay person. The children’s book is harder than I thought it would be to write. Kids aren’t stupid and you really have to think about the 6-10 year olds you’re writing for.

UnitedCoR: Are you taking steps to become more prominent in the nontheist movement beyond your website, whyevolutionistrue.wordpress.com?

Dr. Jerry Coyne: That’s a bit of a loaded question because I never took any steps to become a leader and I am not particularly ambitious. I just became interested in atheism and rationalism because I was an evolutionary biologist. It’s the same career path Richard Dawkins took. When you first write a book on evolution, you think you’re going to convince the world until you realize half of the world can’t be convinced. Religion is a fabric of superstition and wish thinking and it doesn’t belong in science. I’ll keep giving talks as long as people ask me but I really want to start traveling for pleasure. The movement has become more successful so there’s not much need for conferences and a Reason Rally any more; the days of atheist meetings may be winding down, and that’s a testimony to our success.

UnitedCoR: Could you explain to our readers what the Ceiling Cat Staff is?

UnitedCoR: You really love cats. How many are named after you?

Dr. Jerry Coyne: Well, there are five. Jerry the Cat in New Zealand, Jerry the Cat in London, Jerry the Cat who was bred by my friend Anthony Hutchinson is a very rare Bengal Cat, my friend Robin Cromwell’s black cat (she’s the former CEO of the Richard Dawkins Foundation for Reason and Science), and your tabby, Jerry Cat.

UnitedCoR: Are you still doing research or do you speak and write now?

Dr. Jerry Coyne: I mostly just speak and write. I write reviews and critiques for different magazines and editorials but my plan is to transition from science into something more challenging like traveling and writing. Writing is a challenge that will sustain me for the rest of my life because you can always get better. That and there’s always something to write about.

UnitedCoR: Was evolutionary biology your “calling” in life, or do you wish you would have done something else?

Dr. Jerry Coyne: Like most men, I wish I had the creativity to be a rock star. What is it? “Money for nothing, chicks for free?” Barring that, I’m very happy with what I’ve accomplished. With all of the aspects of biology, I think evolution is the most challenging so I think I chose the right field.

UnitedCoR: If you had any advice for a college student entering the field of biology or any of the sciences, what would be your advice?

Dr. Jerry Coyne: I get asked this question a lot, and I always answer the same way that everyone answers: do what I did (laughs). That’s BS. That doesn’t always work for everyone because everyone is different. There are many routes to success. I was reasonably intelligent in college but not super intelligent like my Harvard classmates. I just wanted to pass! So I kept my head down and read broadly on my subject. I think that, making sacrifices now so you can have a career and working weekends in the lab will give you all the success you need!

We appreciate Dr. Coyne for taking time out of his schedule and travels to speak with UnitedCoR for this interview. Apart from his Why Evolution is True blog, you can also follow Dr. Coyne on Twitter.