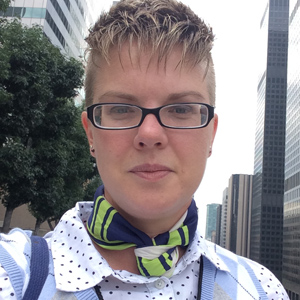 Elsa Roberts is co-president of Secular Woman, an organization for non-religious women, where she dedicates her time to fulfilling their mission of giving voice to the perspectives of secular women and advocating for their full rights and inclusion in society. She was raised by fundamentalist Christians in almost total isolation in the Ozark mountains, but somehow found her way to Miami. Elsa is an enthusiastic urbanist and dedicated transportation advocate for walkability. When not writing or thinking about that, she is perfecting her latest recipe (right now it’s Sticky Toffee Pudding which you should all try, now!).

UnitedCoR’s Education Officer and National Coordinator: Elsa, could you tell us how you came to be involved with Secular Woman?

Elsa Roberts: I became aware of Secular Woman shortly after it was founded (within a month). I forget how, but it was most likely through an announcement on a blog or something like that. I was immediately inspired to join and become a volunteer. I was on the communications committee and began to design and write for our first newsletter. I have been involved ever since.

SC: Not everyone understands feminism in the 21st century, could you outline some of the basic concepts of modern feminism.

ER: In many ways modern feminism isn’t that different from the feminism of women 100 years ago, or even earlier. Feminists from as long ago as Mary Wollstonecraft quite clearly outlined how the unequal treatment and infantile, irrational view of women is a deep seated social problem and asserted that women were just as capable as men of rational thought and action (provided they had the education necessary). The feminism of today is still about achieving those goals and advancing the recognition of women as fully human and fully deserving of the same rights and privileges of men (see Martha Nussbaum’s work for a great humanist argument of what human rights are). Some of the basic concepts of the feminist movement today would be the concepts of equity and intersectionality.

Equity is sometimes used interchangeably with equality but the two are somewhat different. Equality is when two groups technically have access to the same opportunities and is often legalistic in nature in some way. An example of equality would be the result of the recent Supreme Court decision that made same-sex marriage legal across the United States. Now, with respect to marriage under the law, lesbian, same-sex couples have the same legal rights as opposite sex couples. Equity on the other hand is a bit more comprehensive in nature and encompasses a systems view of equality that takes into consideration social/cultural norms and the different situations marginalized groups of people deal with due to history.

Equity is the act of recognizing differences between groups that have the effect of making equal access and treatment inexistent. Striving for equity means working to create a climate where equal opportunity is actually fully accessible. For example, although women legally have the same work opportunities as men in the US, in practice sexist cultural attitudes and norms continue to hamper women’s equal access – women’s work and competency is judged unfairly in relation to men’s, women face discrimination and unconscious bias in treatment that impacts their ability to be promoted, to get raises, etc. Thus, while technically women have legal equality in terms of access to work, in practice things are inequitable.

Intersectionality is a word that has become increasingly popular and in use. Even Buzzfeed knows about it – so it must be mainstream (haha). Intersectionality is really a brilliantly simple concept developed by Kimberle Crenshaw in an article published in the The University of Chicago Legal Forum in 1989. In short, she wrote about the lives of black women, arguing that black women cannot be simply black one moment and a woman the next as though they are separate identities and experiences. Rather, she argued, black women experience an intersection of two group identities: black and woman.

Both of these identities lead to experience that are different than those of black men or white women (or asian women, etc.). Basically Crenshaw pointed out a truth that is so insightful and obvious that it seems unthinkable we hadn’t thought of it before: that individuals belong to multiple identity groups/social groups and that those multiple categorizations will inflect their personal experience within each group.

Crenshaw explains this well herself in this excerpt quoted here: “The value of feminist theory to Black women is diminished because it evolves from a white racial context that is seldom acknowledged. Not only are women of color in fact overlooked, but their exclusion is reinforced when white women speak for and as women. The authoritative universal voice – usually white male subjectivity masquerading as non-racial, non-gendered, objectivity – is merely transferred to those who, but for gender, share many of the same cultural, economic and social characteristics (p. 154).”

SC: Could you tell us a little bit about the mission of Secular Woman?

ER: Secular Woman was formed after CFI hosted the first Women in Secularism conference. The founders of SW were so inspired by the conference, and it made it clearer than ever before that there was a gap in the secular movement, there was no secular organization that focused on women. Our founders responded to that gap, and worked tirelessly for a month to launch the organization. They decided that Secular Woman’s mission should be to amplify the voice of secular women and our interests. And, over the years, we have supported and driven a many projects that amplified the voices of secular women in a number of ways.

We have an active membership—many of whom participate in our members’ only group—which functions as a supportive social space, a place to share information, and build community. Additionally we have highlighted the voices of women and issues important to them through article series during Women’s History month, Pride Month, Sex Ed Week, and more. We’ve hosted numerous twitter chats and we host movie watch parties and informal Google chats with members. We’ve also supported conferences of interest to women, including Secular Women Work, which our co-President, Monette Richards, helped to coordinate.

Our mission reflects the need in our community for women’s needs and interests to be heard. Although the balance in leadership is improving in the movement, we have some improvements to make still (as does the rest of society). We are working to be an organization that supports women and advocates on their behalf – that includes making sure our contributions aren’t forgotten (as we are doing with the HerStory and Wiki Project) and that issues of sexism are addressed (such as advocating for harassment policies).

SC: On your path to feminism and atheism I’m sure you have had some funny and poignant moments, is there any moment that particularly stands out that you could share with us?

ER: So this is only partly related but when I first went to college (prior to that I was homeschooled and raised in utter isolation by fundamentalist Christian parents) I broke with my parents in a pretty big way by joining and LGBTQ student group. They disowned me for it before changing their minds and taking me back into the family (that didn’t last long either). I found out later that they told my siblings I was possessed by a demon – they even prayed a hedge of protection around my room so that Satan’s evil spirit couldn’t infect the rest of the house. A friend of mine, in a stroke of dark humor, named my demon Saytheis (pronounced say thee us). To this day that makes me laugh.

SC: Is there any way that the local CoRs can assist Secular Woman with their outreach?

ER: Absolutely, yes! We would love help finding volunteers as we are always in need of them to help us with projects (like the Wiki project that is documenting women who are currently active in the secular movement) and working on different aspects of the organization. Additionally, we are always looking for ways to partner with groups and to support women in the secular community by advancing their projects, we would be happy to talk to local CoRs about possibilities for collaboration, etc.