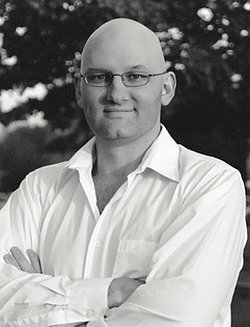 Benjamin Radford has authored, coauthored, or contributed to more than twenty books and one thousand articles on topics including urban legends, unexplained mysteries, the paranormal, and critical thinking. He regularly speaks at universities and conferences and has appeared on Good Morning America, CNN, The History Channel, and more. His latest books are Mysterious New Mexico: Miracles, Magic, and Monsters in the Land of Enchantment and Bad Clowns.

Benjamin Radford: I began by writing a couple of short pieces about 16 or 17 years ago. When I was an undergrad at University of New Mexico, I had written an essay for the General Honors Program that actually got me an award, and part of the award was to fly to Logan, Utah, with other winners and present my essay. The topic was on human fallibility and technological disasters including the Chernobyl nuclear accident and the Challenger shuttle disaster, and how human error played a role in those. And during the course of the first afternoon there we found a bookstore and in this bookstore we found copies of Skeptical Inquirer magazine – back issues – including one issue on Nostradamus by James Randi. I picked this up and found it fascinating.

So I bought the back issue and shared it with my father back home in Albuquerque, who said the editor of the magazine actually lived in Albuquerque  – Kendrick Frazier. So I emailed him and said I would like to write for the magazine and he said sure… and so I came up with a couple of short pieces and articles and then after about a year or two I got a call saying that there was a position for managing editor of the magazine in Buffalo and I said, “Well why not?”  So I threw caution to the wind and moved up to Buffalo and became managing editor and now deputy editor, and since then have done research and outreach and stuff like that.

UnitedCoR: Tell me a little about your new book, Bad Clowns.

Benjamin Radford: This is actually my ninth book, I’ve done eight non-fiction (authored and coauthored) and one novel as well. I had always been interested in the evil or scary clown figure in pop culture.  A lot of people are afraid of clowns; they freak a lot of people out. I had the idea to write the book about ten years ago but it got put on the back burner… then about two or three years ago, after my book Mysterious New Mexico came out, I was talking to my editor and they said  “So…what do you have next?”

I told them I had this idea about doing a book on clowns – evil clowns… and they said, “Okay – we get that!” I ended up doing interviews and so forth and as it happened, had collected weird news over the years about clowns and put it in a folder. That was basically the impetus… I checked around to make sure there weren’t any competing books out there and much to my surprise there were no books on bad clowns.

There were some small chapters here and there, but for such a well-known archetype, I was surprised no one had actually done a somewhat scholarly in-depth examination (somewhat tongue in cheek – we’re talking about clowns after all!). So I decided I would do it and that’s how it came about. The book came out on April 1st (no fooling) and it’s online, in bookstores and so forth, and first book I’ve done with color plates. That was exciting to me.  It’s all about bad, scary, evil clowns through history… all the way to modern evil clowns and real life killer clowns. It was, to say the least, an interesting book to research.

UnitedCoR: Are you going to the Reason Rally?

Benjamin Radford: I am a supporter of Reason Rally and it’s wonderful and nice to get the profile of rationalists out there.  I certainly support this – hopefully next year I would be available to speak or attend.