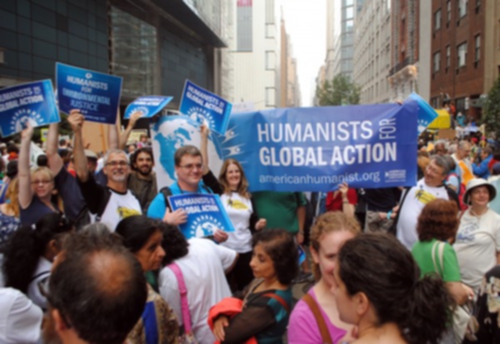 More than 300 humanists gathered in New York City yesterday to participate in the People’s Climate March. This was the largest climate demonstration in history, with more than 300,000 participating overall. The purpose of the march was to demand that world leaders take decisive action on the climate as they convene in New York City this week for a United Nations climate summit.

Prominent marchers included UN Secretary General Bar Ki-moon, former Vice President Al Gore, and U.S. Senators Bernie Sanders and Sheldon Whitehouse. “This is the planet where our subsequent generations will live,” said Ban. “There is no Plan B because we do not have Planet B.”

American Humanist Association (AHA) chapters from throughout the Northeast organized groups to participate. Many wore t-shirts identifying their groups, which were located in New York, New Jersey, Connecticut, Pennsylvania, Rhode Island, Massachusetts, and Washington, DC.  Many carried signs with humanist messaging such as “Humanists for Environmental Justice,” and several carried a large banner reading “Humanists for Global Action.”

Organizers requested that those marching in groups assemble in staging areas, and most of the humanist marchers joined a large interfaith group. The interfaith marchers gathered around signs identifying almost every conceivable religion and belief system. While most of the designations were for mainstream religions, there were also designations such as New Age, New Thought, and Pagan. Secular designations included Ethical Culture, Humanist, Atheist, and Agnostic. Members of AHA chapters joined with members of the American Ethical Union (AEU) societies.

Tens of thousands of interfaith participants waited to march for several hours, filling a staging area that took up an entire city block. Despite the delays and overcast skies, the mood was upbeat, with many expressing sentiments of hope and community. Emily Newman, who helped to coordinate the participation of AEU members, said that she was “moved and inspired by how we all are working together to face climate change.”

Most of the humanists who participated completed the march despite significant delays. At one point, the march came to a standstill because the entire two-mile route was completely full. Tens of thousands, including the humanist marchers, waited at their stating areas for more than three hours. Despite these frustrations, the 300,000 marchers remained peaceful and civil. Police reported that no arrests were made.

Among the participants was Humanist Chaplain Greg Epstein, executive director of the Humanist Community at Harvard and its Humanist Hub. Epstein said that nothing could be a more important aspect of humanism than fighting climate change, because we are “fighting for our natural world.” Epstein was particularly pleased that humanists were marching with people of faith because fixing this problem will require that “the nonreligious work closely with other communities.”

Many participants focused on the seriousness of the threats presented by climate change. Temma Ehrenfeld, a writer living in New York, said that fighting climate change was a crucial issue for humanists because a failure to make changes would be tantamount to suicide. “If human beings allow our own technology and way of life to make the planet uninhabitable we will make ourselves extinct,” said Ehrenfeld, who is currently a student at The Humanist Institute.

Humanists of Rhode Island President and political activist Steve Ahlquist traveled to New York by bus to participate. Ahlquist called the problem of climate change “the greatest challenge in human history.” He also believes that humanists must make this a priority. “Tackling climate change is going to require a broad movement coalescing around a variety of social and economic, as well as ecological issues,” said Ahlquist. “Humanists excel at this kind of philosophical and political synergy and are poised to play key leadership roles in local movements.”

Many of those marching expressed their belief that the massive turnout could precipitate significant action. Some compared the event to the Vietnam-era protests in terms of size and potential influence. One marcher from Connecticut said, “I have been frustrated for years by my inability to do anything meaningful. It feels great to finally do something that might make a difference.”

While some feel that the march may represent a turning point, others emphasized the enormity of the task that lies. Said Ahlquist, “The real work begins when we go home.”

This article originally appeared on theHumanist.com and is reposted here with permission.  The original article can be found here http://thehumanist.com/news/science/humanists-participate-in-historic-peoples-climate-march