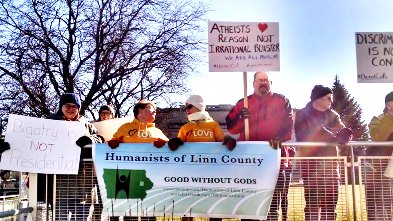 On December 17th, the Humanists of Linn County was excited to have one of its members, Alan Diehl, elected to the Board of Directors of the Inter-Religious Council of Linn County at their annual meeting. Diehl, a former Baptist Associate Pastor, will be a great representative for the group and looks forward to working with the IRCLC. Diehl said, “Secularists, in general, are still a very misunderstood group in this country and are often portrayed as evil, bitter people that want all religions to disappear. By joining the Inter-Religious Council, it is my goal to help dispel this stereotype by showing others that the non-religious can be a force for good and can work hand- in hand with the religious community.” Diehl will serve on the Board through 2018. (In the photo are Imam Hassan Selim, Vice President; Alan Diehl Humanist Director on the Board; Rabbi Todd Thalblum, President of the Inter-Religious Council of Linn County.) 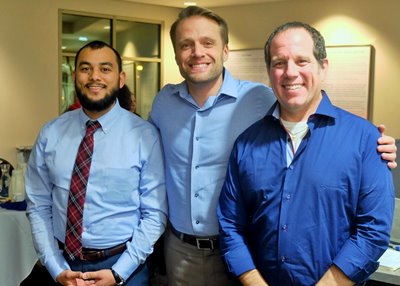 Photos courtesy of The Humanists of Linn County, Iowa

Also during the annual meeting, the IRCLC voted to stage a peaceful protest at a Donald Trump speaking event in Cedar Rapids. The group felt it was important to stand up for Muslims, refugees, immigrants, and other minorities in light of recent inflammatory statements made by the candidate. This protest, attended by nearly 100 people, was the first appearance of Humanists of Linn County with the IRCLC and it was a great experience for everyone. Members of the IRCLC happily held protest signs with #UnitedCoR and #atheistvoter written on them, and all appreciated the atmosphere of camaraderie as they worked as allies on an issue they all felt strongly about – respect and dignity for everyone.