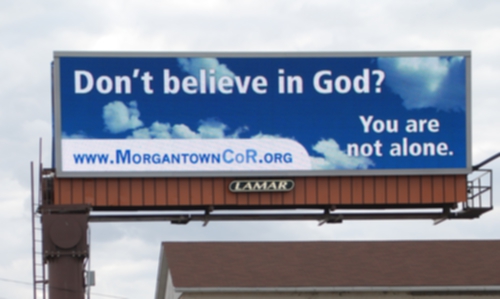 (Morgantown, WV, September 29, 2009.) Atheists and agnostics in Morgantown, West Virginia, have organized around an electronic billboard on Mileground Road. The billboard reads, "Don’t believe in God? You are not alone." These words are superimposed over an image of blue sky and clouds.

Four groups of freethinkers and humanists have pooled their efforts to launch the new Morgantown Coalition of Reason, sponsor of the billboard. Their aim is to educate the public about their worldview and what their groups do. The billboard invites like-minded people to visit the coalition’s website at www.MorgantownCoR.org. Motorists traveling west on Mileground Road into Morgantown will see it between Hartfield Road (the Airport) and Memorial Highway, Route 201, on the right.

Under the co-sponsorship of the United Coalition of Reason, a national coordinating body, this billboard is part of a larger nationwide campaign aimed at raising the public profile of nontheists and organizing nontheistic groups in major cities. The United Coalition of Reason plans to fund billboards in a dozen additional states before year’s end.

"The primary goal of a billboard like this is to act as a beacon for nontheistic people–such as atheists, agnostics, freethinkers and humanists–letting them know they aren’t alone," explained Fred Edwords, communications director for the United Coalition of Reason. "This message is particularly important in a part of the country that, for many, has been identified with traditional religion. Nonreligious people in the area may be unaware there is a thriving community for them."

The Morgantown billboard joins others around the country that appeared earlier, including in Denver, Dallas, Fort Worth, New Orleans, Philadelphia, and Phoenix. The United Coalition of Reason also cosponsored the recent controversial bus ads in Des Moines, Iowa. Unique about the Morgantown effort is that it marks the first time an electronic billboard has been used in the nationwide campaign.

Local organizers say that, although religious believers aren’t a target of the campaign, they too can learn something. "We want the public to see that atheists and agnostics are part of the community, just as the faithful are," said Rachel Cather, spokesperson for the Morgantown Coalition of Reason. "We have the same compassionate values and, in most other ways, are just like them. We are hard-working, tax-paying, moral citizens who care deeply about family, community, state and nation."

The local groups that have launched the Morgantown coalition are the Morgantown Atheists, Morgantown Brights, Freethinkers Morgantown Book Club and Morgantown Thomas Paine Society. “We encourage other like-minded groups in Morgantown and elsewhere in West Virginia to affiliate,” Cather added.

The billboard will remain in place for one month. An image of the billboard design can be found online at at http://morgantown.unitedcor.org/images/MorgantownCoRdotOrg-03.jpg
Caption: Back row: Gerald Turner, Will Booth, Rachel Cather, Brent Lally, Chad Epling, Cat McConnell
Front Row: Butch Campione, Neece Campione, Susan Musick and Dan’l Musick
Another photo is available at http://morgantown.unitedcor.org/images/MorgantownCoRdotOrg-02.jpg

The United Coalition of Reason exists to raise the visibility of nontheists and change the way they are perceived by average Americans. The organization carries out its mission by bringing local nontheistic groups together for the purpose of creating a stronger community voice. United CoR is a nonprofit educational and charitable organization, online at www.UnitedCoR.org.

The Morgantown Coalition of Reason is a community of nontheistic groups in the Morgantown area. Morgantown CoR works to raise the public profile of and cooperation among all such local organizations.