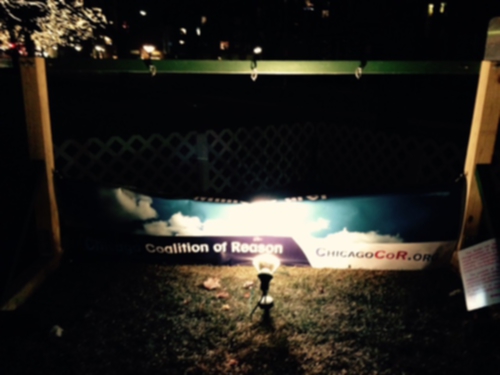 “This shows loud and clear just how necessary our group is,” said Tom Cara, president of the Freedom from Religion Foundation–Metropolitan Chicago Chapter. “Whenever an atheist is public about her or his identity, there are others who will seek to impose and proselytize their opposing views. This is why our group seeks to offer a safe space for freedom of conscience.”

The banner which read, “Are you good without god? Millions are” was ripped from its grommets at the top, and the two eye hooks to which the banner was attached were ripped from their stand. Additionally, the disclaimer signs for both the Chicago Coalition of Reason banner and the FFRFMCC “A” for atheist signs were severely bent out of shape.

“The only purpose of that billboard was to reach out to our own audience and bring them into our community,” noted Cara, who is also a member of the Chicago Coalition of Reason. “It wasn’t even speaking to theistic believers.”

“Hopefully this vandalism will inspire more nontheistic people in Chicago and all across America to realize how important it is to join with others of like mind,” added UnitedCoR’s Executive Director, national coordinator for the United Coalition of Reason, the parent organization of the Chicago Coalition of Reason. “Only by working together can we end this unwarranted bigotry against philosophical and religious minorities.”

The Chicago County Coalition of Reason ( www.ChicagoCoR.org ) serves as a resource for the public and offers a means for combining the voices of those who hold to a nonthesitic, pro-science outlook. It is made up of the Humanists of West Suburban Chicagoland, Secular Students Association of Elmhurst College, Kol Hadash, Ethical Humanist Society of Chicago, Freedom From Religion Foundation–Metropolitan Chicago Chapter, North Suburban Chicago Freethinkers Meetup, Chicago Skeptics Meetup Group, North Suburban Chicago Atheist Meetup Group, South Suburban Freethought Community, Wheaton Atheists, Chicago Brights, Chicago Society of Friends of Epicurus, and The Chicago Freethought Project.