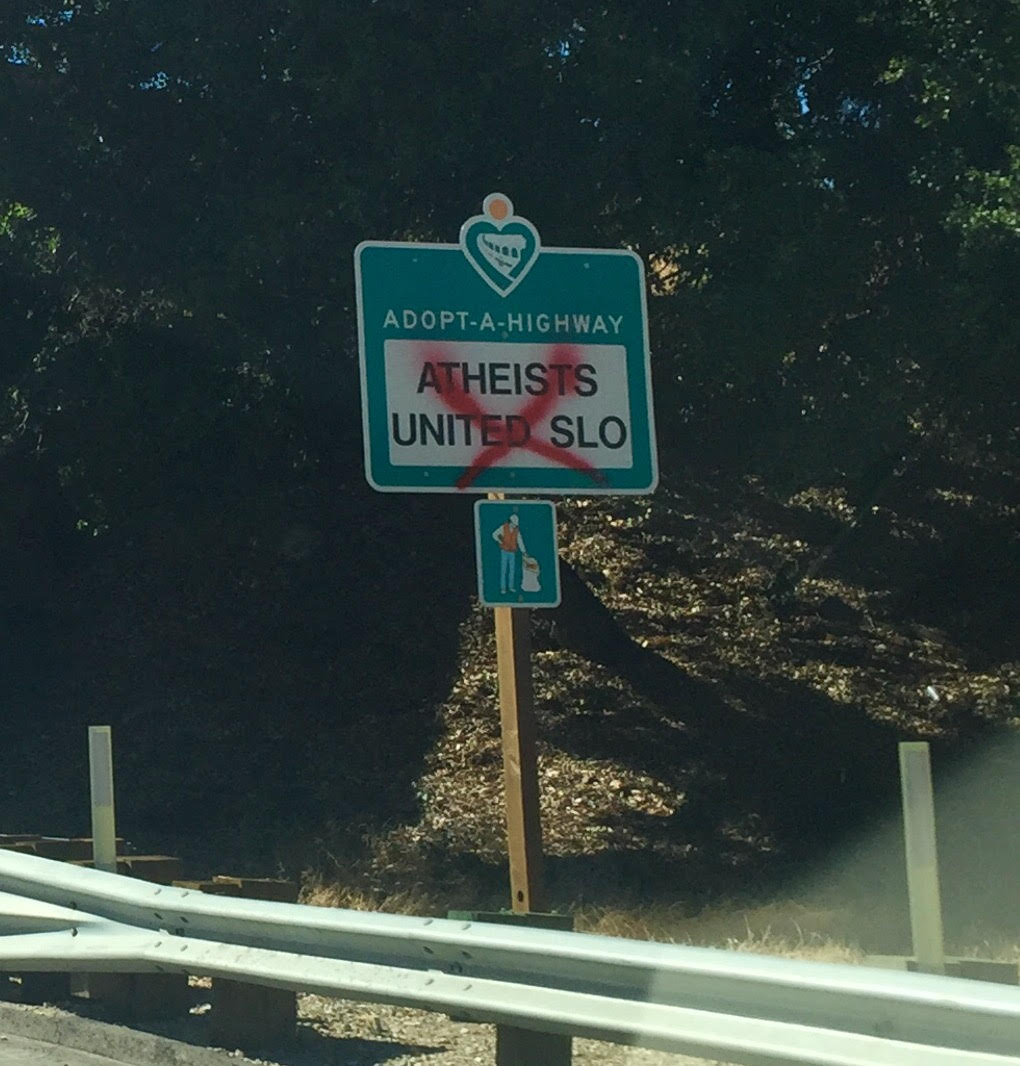 (San Luis Obispo, California, September 20, 2015) A vandal has spray painted over part of an Atheists United Adopt-a-Highway road sign. The sign is located on the southbound Highway 101, near Atascadero. The vandalism was discovered Saturday, September 19 by members of Atheists United San Luis Obispo (AU SLO). The California Department of Transportation has been notified.

“This shows loud and clear just how necessary our group is,” said Steve Arkowitz, Coordinator of the Central Coast Coalition of Reason. “Whenever an atheist is public about her or his identity, there are others who will seek to impose and proselytize their opposing views. This is why our group seeks to offer a safe space for freedom of conscience.”

“AU SLO stands for reason, compassion, and tolerance for all people,” said Arkowitz. “The highway sign is a symbol of the positive work we are dedicated to performing in our local community for the benefit of citizens of all sincerely-held beliefs.”

With this section of highway, the atheist community in San Luis Obispo will participate in the forthcoming statewide Coastal Cleanup.

“Hopefully this vandalism will inspire more non-theistic people around San Luis Obispo to realize how important it is to join with others of like mind,” added UnitedCoR’s Executive Director, executive director for the United Coalition of Reason, the parent organization of the Central Coast Coalition of Reason. “Only by working together can we end bigotry against philosophical and religious minorities.”

Atheists United of San Luis Obispo (www.auslo.org) is a meeting place for all atheists, agnostics, and science-based skeptics to get to know each other, share ideas and build a community of like minded individuals in San Luis Obispo County. We have a vibrant and active organization that offers a variety of events to suit individual interests

The Central Coast Coalition of Reason (www.CentralCoastCoR.org) is an alliance of four atheist, freethought, and humanist groups working together on the Central Coast of California. Our goals are to foster a sense of community among like-minded people and raise public awareness that those who don’t believe in a god or gods are ethical and contributing members of our community.

The United Coalition of Reason (www.UnitedCoR.org) exists to raise the visibility and sense of unity among local groups in the community of reason by providing funding and expertise to help them cooperate toward the goal of raising their public visibility.