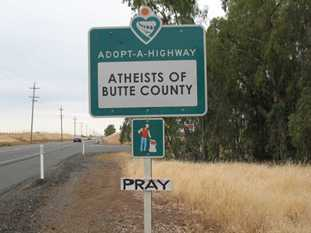 (Chico, California, August 26, 2014) A vandal has pasted words over part of an Atheists of Butte County Adopt-a-Highway road sign. The sign is located on the south side of Highway 99, near Nelson Road. The words in black block letters add "God loves" above "Atheists of Butte County." The vandalism was discovered yesterday by George Gold, president of the group. The California Department of Transportation has been notified.

"This shows loud and clear just how necessary our group is," said Gold. "Whenever an atheist is public about her or his identity, there are others who will seek to impose and proselytize their opposing views. This is why our group seeks to offer a safe space for freedom of conscience."

This is the second year that Atheists of Butte County, working with the Butte County Coalition of Reason, has sponsored this section of highway, completing the required 12 trash pick-up sessions in 2013 and expecting to exceed that in 2014. This is also the second time their Adopt-a-Highway sign has been compromised. In June 2013 someone pasted the word "Pray" on the pole holding up the road sign.

In December 2012 a billboard placed by the Butte County Coalition of Reason on Skyway near Honey Run Road was also vandalized. It bore the slogan, "Don't believe in God? Join the club." But the word "Don't" was cut out of the vinyl, along with part of the Web address: ButteCountyCoR.org .

"The only purpose of that billboard was to reach out to our own audience and bring them into our community," noted Gold, who is also coordinator of the coalition. "It wasn't even speaking to believers."

With this section of highway, the atheist community in Butte County will participate in the forthcoming statewide Coastal Cleanup.

"Hopefully this vandalism will inspire more nonreligious people in Butte County to realize how important it is to join with others of like mind," added UnitedCoR’s Executive Director, national coordinator for the United Coalition of Reason, the parent organization of the Butte County Coalition of Reason. "Only by working together can we end bigotry against philosophical and religious minorities."

The Butte County Coalition of Reason ( www.ButteCountyCoR.org ) serves as a resource for the public and offers a means for combining the voices of those who hold to a secular, pro-science outlook. It is made up of Atheists of Butte County, Chico Skeptics, the Chico State Secular Student Alliance and the group Chico Freethinkers, Agnostics, Nonbelievers & Skeptics.