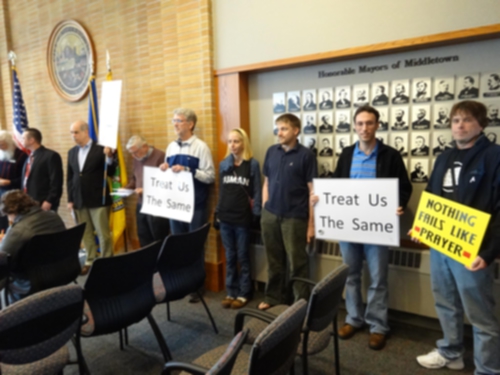 May 1st is designated as the National Day of Prayer by the US government and as the National Day of Reason by the secular community in the US.  In Connecticut this day has been heralded by an unconstitutional prayer session at town hall organized by Middletown’s Mayor, Daniel Drew, over the last several years and protested by local secular groups organized by American Atheists’ state director, Dennis Paul Himes.

Although the mayor claims that this event is “not a sanctioning of any one dogma or any one approach,” it is lead only by Evangelical Christians.  The mayor also claims other religious groups are invited, but the Connecticut Coalition of Reason investigated and found that none of the non-Christian groups responding to the investigation had ever heard about the event.  In either case, the event flyers and handouts are focused only on Jesus and the NIV Bible.  So if other religious leaders were to attend, they would clearly see the sectarian nature of the event.

Fortunately, this year was more low-key than previous years.  Rather than speaking for twenty minutes and remaining for the entire event, the mayor only spent five minutes introducing the session and then hurried off to “focus on other priorities.”  There also seemed to be fewer participants than in previous years, making the ratio of protesters to participants visibly higher.  Additionally, there was a conspicuous absence of police protection.  Mr. Himes speculated that perhaps the letter that the Connecticut Coalition of Reason had sent to the Mayor and local newspapers asking him to cease and desist based on the constitutionality and the waste of tax-payer’s funds used to host the event, might have had a partially desired effect.

As always the protest was followed by polite and respectable conversation by protestors and participants alike.  After the event, the protestors gathered at a local vegan eatery and then several members headed down to New London to donate blood at the National Day of Reason blood drive sponsored by the Atheist Humanist Society of Connecticut and Rhode Island (@AHSCTRI).