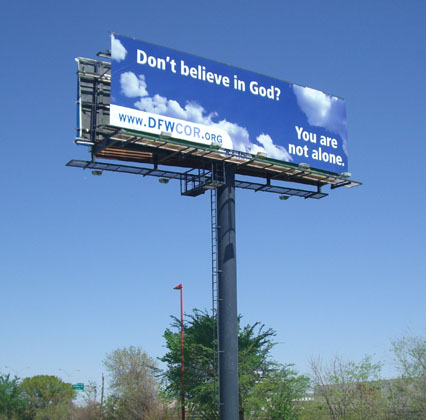 DFW atheist and agnostic groups are organizing around two new billboards going up today on Interstate 35. Seven groups of freethinkers and humanists have pooled their efforts to form the new Dallas-Fort Worth Coalition of Reason to educate the public about their worldview and what their groups do. The billboards invite people to visit the coalition’s website at www.dfwcor.org.

The billboards say, “Don’t believe in God? You are not alone.” These words are superimposed over an image of blue sky and clouds. Motorists traveling northbound on I-35E at Northwest Highway in Dallas and northbound on I-35W just north of downtown Fort Worth will see them.

Under the co-sponsorship of the United Coalition of Reason, a national coordinating body, these billboards are part of an ongoing nationwide campaign to raise the public profile of nontheism and organize secular groups in every major city of the nation.

“The primary goal of billboards like these is to let nontheistic people–such as atheists, agnostics, freethinkers and humanists–know they aren’t alone,” explained Fred Edwords, communications director for the United Coalition of Reason. “The message is particularly necessary in a part of the country that, for many, has become identified with Protestant evangelicalism. Area nontheists may be unaware that there’s a thriving community for them.”

The twin billboards on I-35 join others that have gone up at different times around the country, including those in or near New York City, Philadelphia, Denver, Kansas City, Charleston (South Carolina) and, just last week, northern Idaho.

Although not a target of the billboard campaign, local organizers say that religious believers can learn something too. “We want people to know that atheists and agnostics are as essential a part of our community as the faithful are.” said Terry McDonald, coordinator of the DFW Coalition of Reason. “We have the same compassionate values and, in most other ways, are just like them. We are hard-working, tax-paying moral citizens who care deeply about family, community, state and nation.”

The Dallas atheist and humanist groups that have launched the coalition are the Dallas Brights, Dallas-Plano Atheist Meetup, Free-Thinkers of Fort Worth Meetup, Freethinkers of the University of Texas-Austin, Humanist Association of Fort Worth, Metroplex Atheists, and North Texas Church of Freethought. Additional groups are being encouraged to join in. The billboards will remain in place through April.