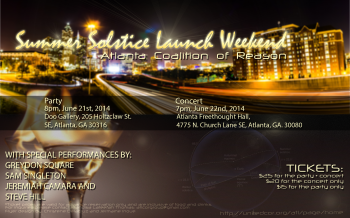 (Atlanta, Georgia, June 11, 2014) With major events two days in a row, a coalition of Atlanta-area atheist, humanist and secularist groups is launching Saturday, June 21, as a new cultural presence.

The twin events form a weekend-long Summer Solstice Celebration. They begin with an Atlanta Coalition of Reason launch party on June 21, followed by a concert on June 22. Speakers and performers will include Greydon Square, Jeremiah Camara, Sam Singleton and Steve Hill. Full details can be found here: https://unitedcor.org/atl/page/events

The local groups that make up the Atlanta Coalition of Reason, or ATL CoR, exist throughout the greater Atlanta area. They are:

The websites of all these groups can be found here:https://unitedcor.org/atl/page/groups

“It is only by proclaiming our groups that we can let others of like mind know there is a growing non-religious community in Atlanta to serve them,” said Mandisa Thomas, coordinator of ATL CoR. “And the general public needs to know that folks like us are everywhere. We are their friends, neighbors, coworkers and family members. We should be as free as anyone to express our views openly.”

The weekend kicks off with a Summer Solstice party, complete with music, dancing, a concert preview and a special presentation by Jeremiah Camara. The event runs from 8:00 PM to Midnight Saturday, June 21, and will be held at:

Then there will be a night of comedy and music, with full performances by Greydon Square, Sam Singleton and Steve Hill. The event runs from 7:00 to 11:00 PM Sunday, June 22, and will be held at:

“Atheists and Agnostics sometimes don’t realize there’s a community for them because they’re flooded with religious messages at every turn,” said Fred Edwords, national director of the United Coalition of Reason (UnitedCoR), the Washington DC-based parent organization of ATL CoR and the funder of the events. “Being visible is therefore important to us.”

The launch of ATL CoR is part of a national campaign by UnitedCoR, which has organized over 70 coalitions of reason in 35 states and the District of Columbia.

“The point of our national awareness campaign is to reach out to the millions of nontheists (atheists and agnostics) living in the United States and let them know there is a local community of like-minded people waiting to welcome them,” Edwords concluded.

The Atlanta Coalition of Reason ( www.AtlCoR.org ) is a resource for freethinking people, uniting the various nontheistic groups in the greater Atlanta area.