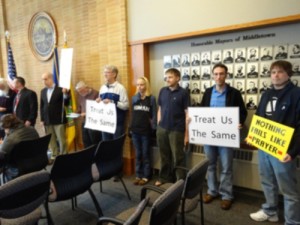 Members of the Connecticut Coalition of Reason will hold a community booth at the Hartford PrideFest on Saturday, September 9th, with an Ask-An-Atheist booth. The booth features Skeptic, Freethinking, Humanist, and Atheist literature both for adults and children, atheist themed tee-shirts for sale and a group of friendly, happy, healthy, productive, tax-paying atheists to answer your questions about what it is like to not have a deity watching and waiting: ready to send someone to hell at the smallest wrong transgression.

WHEN:
Saturday, September 12th from Noon until late.

WHY:
Non-theism is more than just realizing that our society, the world and our universe is a bigger, brighter and more amazing place than all the make-believe ideas. The table allows people to make connections with others of sincerely-held belief in the community, and do something more than just wishing things would change. When we stand together at events like this, it gives a voice to non-theistic people, and encourages others to stand up for who they are. That is what makes atheist and non-believers so exciting, and that is that we don’t have a dogma to guide us but our own logic and reason.

FURTHER INFORMATION:
More information about Hartford Pride can be found at: www.hartfordpride.com.

Connecticut Coalition of Reason at www.ConnecticutCoR.org is made up of atheist, freethought, and humanist groups working together in the state of Connecticut. Their twin goals are to foster a sense of community among the like-minded and raise public awareness that people who don’t believe in a god or gods can be decent citizens who contribute to the larger society.

The United Coalition of Reason at www.UnitedCoR.org is a non-profit organization that helps local non-theistic groups work together to achieve higher visibility, increase membership, and have a greater impact in their local areas.