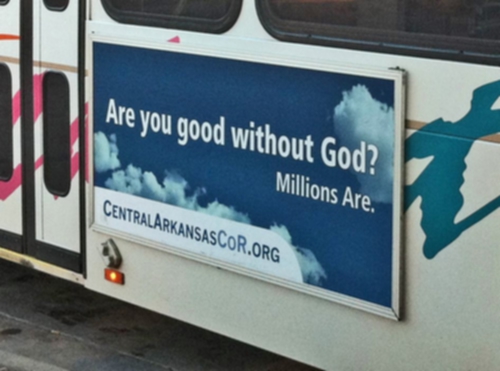 The posting of these ads by On The Move Advertising (OTMA) is in fulfillment of a federal court order handed down in response to a June 1 lawsuit by UnitedCoR, represented by the Appignani Humanist Legal Center of the American Humanist Association (AHA). In its suit, UnitedCoR alleged that CATA and OTMA had violated its constitutional free speech rights by declining to apply the same acceptance standards to atheist ads as it applies to religious ones. At a hearing held August 11, UnitedCoR sought a preliminary injunction requiring CATA and OTMA to give equal treatment. The injunction was granted by Federal Judge Susan Webber Wright, and the appearance of these ads is the result.

Originally, Central Arkansas CoR had wanted its ads to run during Little Rock’s Riverfest this past May. But now, in the wake of the successful litigation, it has chosen to take advantage of the increased audience provided by the state fair and the fact that two CATA bus routes serve the fairgrounds. CATA routes also serve local college campuses and, with classes now in session, Central Arkansas CoR leaders hope their ads will reach students as well. Two new Secular Student Alliance groups have formed this semester under the Central Arkansas CoR umbrella.

Beyond this, the Little Rock campaign is part of a nationwide effort. Since the spring of 2009 there have been similar bus ad and billboard campaigns in 25 states and the District of Columbia. These include an April 2010 bus and billboard campaign in Fayetteville, Arkansas, as well as campaigns in Arizona, California, Colorado, Florida, Illinois, Iowa, Kentucky, Louisiana, Maryland, Massachusetts, Michigan, Minnesota, Missouri, Montana, New Jersey, New York, Ohio, Oklahoma, Oregon, Pennsylvania, Texas, Utah, Washington, and West Virginia.

"The Little Rock effort is part of a nationwide awareness campaign that is reaching out to the millions of atheists and agnostics living in the United States," explained Fred Edwords, national director of the United Coalition of Reason. "Often such nontheists don’t realize there’s a community for them because our culture is dominated by biblical faiths. We want our work to show them they aren’t alone."

Attracting the like minded isn’t the only goal of the effort. "We want folks to understand that atheists and agnostics are a legitimate part of the community," said LeeWood Thomas, media representative for the Central Arkansas Coalition of Reason. "People like us live all over Arkansas. We’re your friends and family, neighbors and coworkers, and maybe even the person sitting next to you in church."

"Being visible is important to us," Edwords concluded, "because nontheists in our society often don’t know many people who think like they do. We are reaching out to them, just as traditionally religious organizations reach out to their audience.

For high-res images of the bus ad, free for media use, go to www.CentralArkansasCoR.org .

For the original June 1 press release announcing the litigation, along with court filings, go to http://www.unitedcor.org/national/news/atheists-sue-little-rocks-transit-authority-rejecting-godless-bus-ads.

The Central Arkansas Coalition of Reason is a resource for Little Rock-area atheists and agnostics and a coalition of 11 local nontheistic groups serving that audience.

The United Coalition of Reason is a network of over 50 local coalitions nationwide and works to raise the visibility and sense of unity among nontheistic groups by promoting cooperation and providing funding.