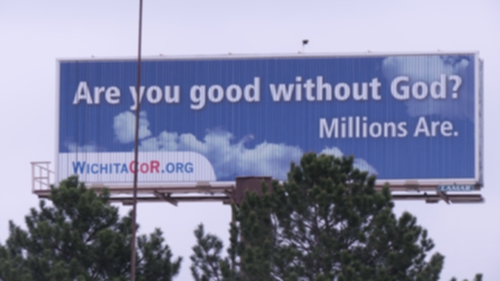 These words, superimposed over an image of a blue sky and clouds, will appear on two 14 foot tall billboards in Wichita. One is on the right-hand side of the Kansas Turnpike, I-35 North just beyond East 47th Street South, the other on the left-hand side of West 21st Street North, facing eastbound traffic after it crosses North Tyler Road. The ads will run all month. They are being placed by the new Wichita Coalition of Reason (Wichita CoR) with $4,108 in funding from the United Coalition of Reason (UnitedCoR).

The ad campaign marks the public launch of the Wichita Coalition of Reason, an alliance of three non-theistic groups in the city. It also heralds Skeptics of Oz, the coalition’s free conference, which will run from April 21-22 at The Forum Theater, 147 South Hillside Street, in Wichita. NASA astronomer Phil Plait is the headline speaker among a number of other scientists and prominent leaders in the skeptic and freethought movements. The conference will draw a statewide audience and UnitedCoR is the largest organizational sponsor.

Reaching out to the like-minded isn’t the only goal of the coalition: "We hope people will realize that we’re already a regular part of the community," said Sean Gillespie, coordinator of Wichita CoR. "Non-theists and skeptics like us live throughout Kansas. We’re your friends, relatives, neighbors and coworkers. Some of us may even be in the pew next to you in church!"

"Visibility is important to us," Edwords concluded, "because, in this society, atheists and agnostics often don’t know many people like themselves. Furthermore, if traditionally religious people can be open about their views, why can’t we be open about ours?"

For high-res images of the billboards, free for media use, go to WichitaCoR.org .

For information on the Skeptics of Oz conference, go to SkepticsofOz.org .

The Wichita Coalition of Reason is a resource for freethinking people, with the goal of uniting the various non-theistic organizations throughout the greater Wichita area.

The United Coalition of Reason is made up of more than 55 local coalitions nationwide and works to raise the visibility and sense of unity among non-theistic groups.