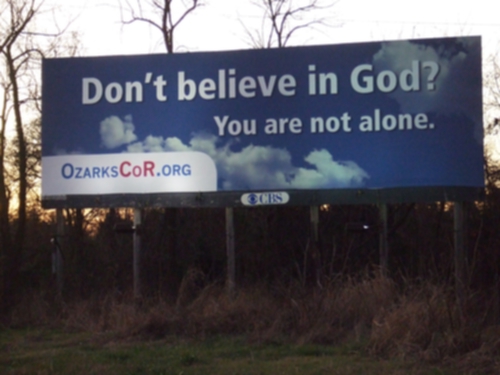 These words, superimposed over an image of a blue sky and clouds, are slated to appear tomorrow on two 12 foot tall billboards greeting traffic coming into Springfield. Both will be on I-44: one three miles west of Strafford and on the north side of the road, the other a mile west of Highway 13 on the south side, near U.S. 160. The ads will remain up for four weeks. They were placed by the new Ozarks Coalition of Reason (Ozarks CoR) with $5,000 in funding from the United Coalition of Reason (UnitedCoR).

The ad campaign marks the public launch of the Ozarks Coalition of Reason, which is an alliance of four non-theistic groups in Springfield, Joplin, Branson, and at Missouri State University. It also heralds Skepticon IV, which runs this weekend, November 19 to 20, at the Gillioz Theatre, 325 Park Central East, in Springfield. Featured speakers include P.Z. Myers, Greta Christina, Dan Barker, Rebecca Watson, David Silverman, and other leading lights in the skeptic and freethought movements. The United Coalition of Reason is the largest organizational sponsor.

For high-res images of the billboards, free for media use, see the right sidebar.