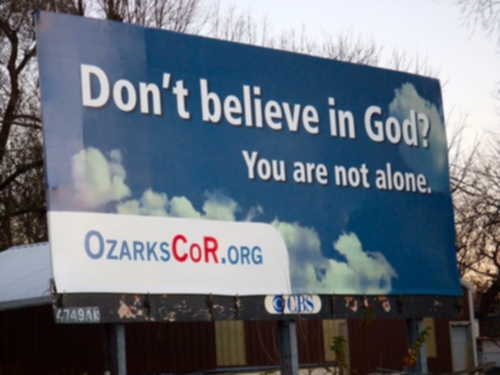 These are the words, superimposed over an image of a blue sky and clouds, that are now up on two 12 foot tall billboards greeting traffic coming into Springfield. Both are on I-44: one of them three miles west of Strafford on the north side of the road, the other a mile west of Highway 13 on the south side, near U.S. 160. The ads will remain up for four weeks from today. They were placed by the new Ozarks Coalition of Reason (Ozarks CoR) with $5,000 in funding from the United Coalition of Reason (UnitedCoR).

The ad campaign marks the public launch of the Ozarks Coalition of Reason, an alliance of four non-theistic groups in Springfield, Joplin, Branson, and at Missouri State University. It also heralds Skepticon IV, which has its initial event today, a 1:00 PM field trip to the Creation Museum of the Ozarks, at 112 Pine Street in Strafford, led by biologist and creationist opponent P.Z. Myers. Starting tomorrow, conference events will be held at the Gillioz Theatre, 325 Park Central East, in Springfield. Featured speakers include Greta Christina, Dan Barker, Rebecca Watson, David Silverman, and other leading lights in the skeptic and freethought movements. The United Coalition of Reason is the largest organizational sponsor.

"The point of our ongoing nationwide awareness campaign is to reach out to the millions of atheists and agnostics living in the United States," explained Fred Edwords on Wednesday when the billboards were first announced. He is national director of the United Coalition of Reason. "Such non-theists sometimes don’t realize there’s a community for them because they’re inundated with religious messages at every turn," he added. "We hope our effort will serve as a beacon and let them know they aren’t alone."

For high-res images of the actual billboards, free for media use, go to www.OzarksCoR.org.