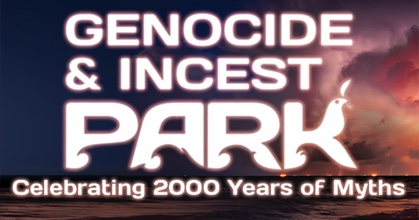 These words are planned for a mobile billboard that will be driven around the Williamstown, KY area, placed with generous funding from an Indiegogo crowdfunding campaign (https://www.indiegogo.com/projects/genocide-incest-park#/), conducted by the Tri-State Freethinkers. The crowdfunding campaign was conducted as a protest against Ark Encounter—a water park based on a representation of Noah’s Ark. The Tri-State Freethinkers are concerned that Ark Encounter is receiving state tax incentives while maintaining discriminatory hiring practices. Scheduled to open in Williamstown, Kentucky on July 7, 2016, the park celebrates a Biblical parable of genocide and incest. While they have a legal right to celebrate their mythology, the Tri-State Freethinkers finds it immoral and highly inappropriate as family entertainment.

“We knew the IndieGoGo campaign would be big news in freethought and atheist communities. We also knew that once the billboard went up the mainstream press would pick it up and it would be a big story,” explained Jim G. Helton, President of the Tri-State Freethinkers. “However, we were surprised that the mainstream media covered the story of us simply stating that we were raising money to put up the billboard. When the story hit the local press, Lamar backed out. They were unwilling to work with me to try to find a solution that would have resembled anything close to our original concept for the billboard.”

It would appear as if there is a clear double-standard being applied against non-theistic customers in Kentucky. “In the past, Lamar put up Ark Encounter billboards that said ‘You can’t sink this ship,’ which targeted opponents to the park. We then found a small private mobile billboard company willing to drive around the park. After initially agreeing to drive the billboard around the park on multiple weekends during the summer, he recently backed out due to fear of his own personal safety,” Helton said. “If we find a company willing to put up our billboard, we are willing to allow other organizations to use our billboard to show their opposition to the Ark Encounter and to promote their local groups. We are in the early stages of trying to put together a protest on July 7, which is opening day and an after party to celebrate science and reason.”

“We secularists, agnostics and atheists are essentially like everyone else,” added Helton. “We’re your friends, neighbours, co-workers and family members. All we want is a place at the table for our ideas, too, and we are concerned that our voice and message is being denied in favor of religious messages.”

Tri-State Freethinkers (www.tri-statefreethinkers.com) is a social, academic, and activist group with over 1,400 members in Kentucky, Indiana, and Ohio. They are advocates for equal rights and the separation of church and state. They empower their members to make positive change by giving back to our community. Tri-State Freethinkers make their decisions based on facts, logic and reason, not superstitions, myths, or dogma.