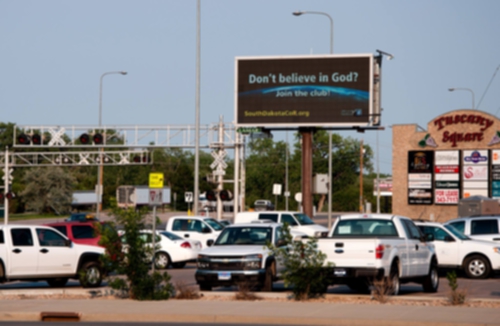 These words, superimposed over an Earthrise image, can be seen on seven prominent billboards across South Dakota. Their appearance marks the formal launch of the South Dakota Coalition of Reason (South Dakota CoR), an alliance of the seven non-theistic (atheist and agnostic) groups in the state, reaching from the Black Hills to the Big Sioux River. The participating organizations are:

and Secular Student Alliance groups on the following campuses:

Sponsored by South Dakota CoR, with $11,148 in funding from the United Coalition of Reason (UnitedCoR) and an anonymous South Dakota donor, the billboards will remain up through September 15. They can be found at the following locations:

On the west (right-hand) side of Hwy. 14, when entering Brookings from the west, facing north (will remain up thru October 13)

A digital billboard at 425 Omaha Street, south side, facing west

On the south side of 12th Street, west of Grange, facing east

The bottom billboard at Mile 93.8 on the west side of I-29, facing north

On the east (right-hand) side of Hwy. 19, north of Cherry, facing north

The billboards in Rapid City, Sioux Falls and Spearfish are illuminated at night. For hi-res images, free for media use, see the right sidebar.

The campaign is part of a coordinated nationwide program that began in 2009. From then to now, similar campaigns have been launched in 33 other states and the District of Columbia. Each local campaign is sponsored by a multi-organizational coalition of non-theistic groups in the area.

"The point of our national awareness campaign is to reach out to the millions of humanists, atheists and agnostics living in the United States," explained Fred Edwords, national director of UnitedCoR. "Non-theists sometimes don't realize there's a community for them because they're inundated with religious messages at every turn. So we hope our effort will serve as a beacon and let them know they aren't alone."

Reaching out to the like-minded isn't the only goal of the effort. "We want people to know that secular freethinkers like us are a regular part of communities all over the state," added Eric Novotny, coordinator of South Dakota CoR. "South Dakota non-theists are your friends and neighbors, your coworkers and family members. And we should feel as free as anyone to express our views openly."

"Ten years ago the nonreligious community really started growing," said Josh Combs, the coalition's leader in Rapid City, "and now we are 20 percent of the general population."

"Being visible is important to us," Edwords concluded, "because in our society non-religious people often don't know many others like themselves."

The South Dakota Coalition of Reason ( www.SouthDakotaCoR.org ) is a resource for freethinking people, uniting the various non-theistic groups throughout South Dakota.

The United Coalition of Reason ( www.UnitedCoR.org ) exists to raise the visibility and sense of unity among local groups in the community of reason by providing funding and expertise to help them cooperate toward common goals.