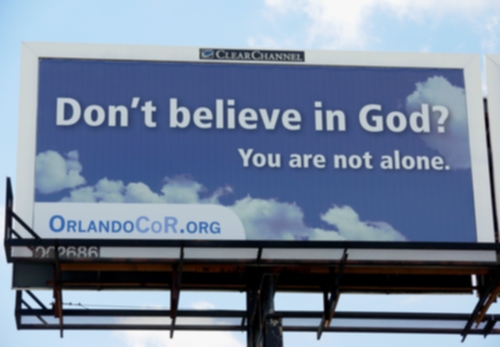 These words appear on six prominent billboards across the Orlando area, from Longwood to Taft, from Winter Garden to Azalea Park. They will remain up through the Easter holiday until Mother’s Day. The 10 ½ by 22 ½’ ft. billboards feature the words superimposed over an image of a blue sky and fluffy white clouds and are illuminated at night. They have been placed by the Orlando Coalition of Reason (Orlando CoR) with $6,250 in funding from the United Coalition of Reason (United CoR).

This ad campaign also marks the public launch of Orlando CoR, a coalition made up of four central Florida freethought groups with activities ranging from educational and activist to social and charitable.

The Orlando billboards are also part of a national effort. Since spring 2009 there have been similar billboards, or bus ads, not only in the Tampa Bay and Northeast Florida areas but in Arizona, Arkansas, California, Colorado, the District of Columbia, Illinois, Iowa, Kentucky, Louisiana, Maryland, Massachusetts, Michigan, Missouri, New Jersey, New York, Ohio, Oklahoma, Oregon, Pennsylvania, Texas, Washington, and West Virginia.

"The point of our nationwide awareness campaign is to reach out to the millions of humanists, atheists and agnostics living in the United States," explained Fred Edwords, national director of the United Coalition of Reason. "Such nontheists sometimes don’t realize there’s a community for them because they’re inundated with religious messages at every turn. But we hope our effort will serve as a beacon and let them know they aren’t alone."

Reaching out to the like minded isn’t the only goal of the effort: "We want people to know that one can be a decent human being and contribute to society without belief in a god," said Jack Maurice, coordinator of Orlando CoR. "You’ll find us everywhere. We’re your friends, your neighbors, your coworkers and your family members."

Edwords added: "We selected the Easter season because it’s at holiday times like these that people like us become most aware of the need for community. Therefore, what better time to inform our audience that such a community of like minded people exists?"

For hi-res images of the billboards, free for media use, see the right sidebar.

The six billboard locations are:

The United Coalition of Reason is made up of over 40 local coalitions nationwide and works to raise the visibility and sense of unity among non-theistic groups by promoting cooperation and providing funding and expertise.

‘Billboard Aims to Link Those Who Are Not Believers‘