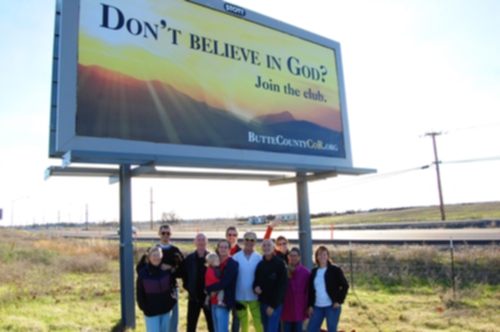 These words, superimposed over an image of a mountain sunrise, now appear on a dozen prominent 10 ½’ x 22 ½’ billboards across Chico. Their appearance marks the formal launch of the Butte County Coalition of Reason, a new organization comprised of three area non-theistic (atheist and agnostic) groups.

"We want to let the general public know that we belong to the larger community,” said George Gold, coordinator of the Butte County Coalition of Reason, today.

"We non-theists are your family members, friends, neighbors and co-workers. We’re just like you, except we don’t believe in a supreme being. It’s about time we were equally free to be open about our views," Gold added.

The dozen billboards, half of which are lit at night, can be found at the locations listed at https://unitedcor.org/butte_county/page/events. Three of these are as follows:

* On Skyway, heading north, on the left, just before Honey Run Road

* On Cohasset, leaving Chico Airport, on the left, before Eaton

Hi-res images, free for media use, are also available at this link. The billboards will remain up through New Year’s.

These billboards are part a coordinated nationwide program that began in 2009. From then to now, 58 similar campaigns have been launched in 33 states and the District of Columbia by the United Coalition of Reason (UnitedCoR). UnitedCoR provided the $3,780 in funding for the Chico billboards.

"The point of our national awareness campaign is to reach out to the millions of humanists, atheists and agnostics living in the United States," explained Fred Edwords, national director of United CoR. "Non-theists sometimes don’t realize there’s a community for them because they’re inundated with religious messages at every turn. So we hope our effort will serve as a beacon and let them know they aren’t alone."

"Being visible is important to us," Edwords concluded, "because, in our society, non-religious people often don’t know many like themselves.

The Butte County Coalition of Reason ( www.ButteCountyCoR.org ) serves as a resource for the public and offers a means of combining the voices of those who hold that science and reason lead to more reliable knowledge than dogma and faith. It is made up of Atheists of Butte County, Chico Skeptics, and the Chico State Secular Student Alliance.