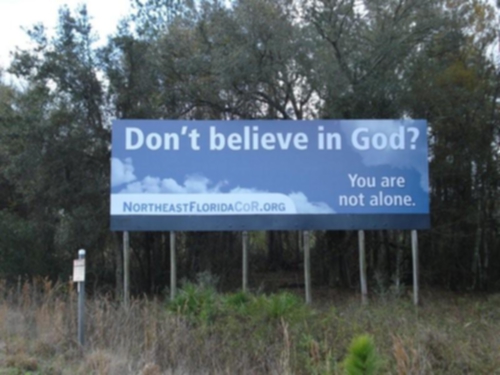 The Jacksonville and St. Augustine billboards are also part of a national campaign. Already this year there have been similar billboards in the Tampa Bay area, Tucson, Sacramento and Seattle. There were also bus ads in Des Moines and Detroit. Last year, United CoR-sponsored billboard, bus, and subway ads appeared in 20 cities, including Boston, New York, Philadelphia, Baltimore, Chicago, Cincinnati, Dallas, Tulsa, Phoenix and San Diego.

"The point of our nationwide awareness campaign is to reach out to the millions of freethinkers, humanists, atheists and agnostics living in the United States," explained Fred Edwords, national director of the United Coalition of Reason. "Nonreligious people sometimes don’t realize there’s a community out there for them because they’re inundated with religious messages at every turn. So we hope this will serve as a beacon and let them know they aren’t alone."

Reaching out to the like minded isn’t the only goal of the effort. "We also want to let the general public know that those of us who don’t believe in a higher power live in the area, too," added Stephen Peek, coordinator of Northeast Florida CoR. "Folks may not know that people like us can be found everywhere. We’re family members, friends, neighbors and coworkers. So we think it’s time that we became open about our views, just as others are open about theirs."

For images of the billboards, free for media use, please see the right sidebar.