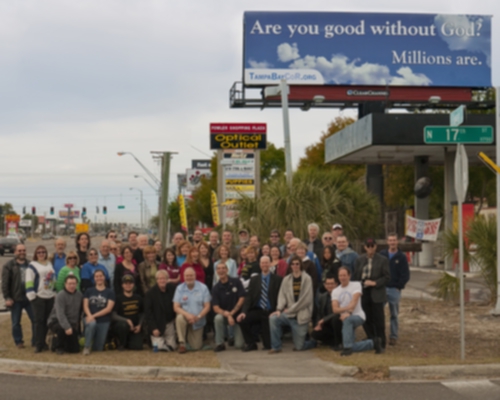 These words are part of prominent, 14' x 48' billboards that have appeared on both sides of Tampa Bay. The one on the Tampa side is near the University of South Florida along East Fowler Avenue near 17th Street, visible to westbound traffic. On the St. Petersburg-Clearwater side the billboard is along Ulmerton Road just east of U.S. Hwy. 19, viewable by eastbound traffic heading toward the airport. Sponsored by the Tampa Bay Coalition of Reason with funding from the United Coalition of Reason, the two billboards carry their message superimposed over an image of blue sky and puffy white clouds. The cost of the campaign is $7,600.

For a hi-res billboard image, free for media use, click HERE.

This effort is part of a coordinated nationwide program that began last year. In December it included billboards in Baltimore, Houston and Tulsa. Previously this month a billboard appeared in Seattle. Each local campaign is sponsored by a multi-organizational coalition of nontheistic (atheist and agnostic) groups in the area.

"The point of our national program is to reach out to the millions of humanists, atheists and agnostics living in the United States," explained Fred Edwords, national director of the United Coalition of Reason. "Nontheists sometimes don't realize there's a community out there for them because they're inundated with religious messages at every turn. So we hope this will serve as a beacon and let them know they aren't alone."

Reaching out to the like minded isn't the only goal of the effort. "We also want to let people know that we nontheistic folks belong to the larger community," added Rick O'Keefe, coordinator of Tampa Bay CoR. "Whether the public knows it or not, we can be found among family members, friends, neighbors and coworkers. We're just like everyone else, except we don't believe in a supreme being. It's about time we were as free as others to be open about our views."

The Tampa Bay Coalition of Reason ( https://unitedcor.org/tampabay ) is a collaboration of freethought, atheist and humanist groups in the Tampa Bay area. It serves as a resource for the public and offers a means of combining the voices of those who hold that science and reason lead to more reliable knowledge than dogma and faith.