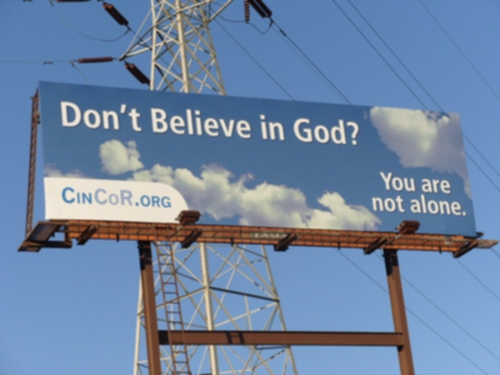 For hi-res photos of each of the three billboards, free for media use, go to www.CinCoR.org , www.NEOcor.org, and www.ColumbusCoR.org.

All of this is part of a coordinated statewide campaign, and each billboard signifies the launch of a local, multi-organizational coalition of nontheistic (atheist and agnostic) groups. The Ohio campaign as a whole is part of an even larger national effort with the stated aim of raising awareness about people who don’t believe in a god.

"The point of our national billboard campaign is to reach out to the millions of humanists, atheists and agnostics living in the United States," explained Fred Edwords, national director of the United Coalition of Reason. "Nontheists sometimes don’t realize there’s a community out there for them because they’re inundated with religious messages at every turn. So we hope this will serve as a beacon and let them know they aren’t alone."