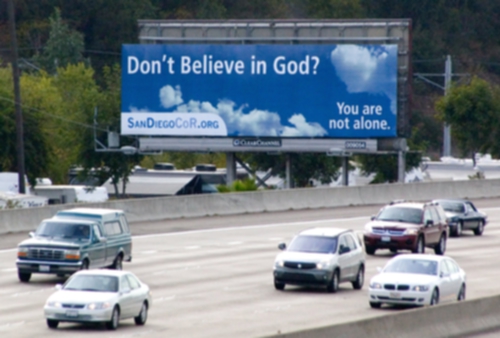 These words are part of prominent billboard slated to go up later today in La Mesa on the south side of Highway 8, just east of 70th Street. Facing east, it will be seen by traffic heading west. It is being placed by San Diego CoR, the San Diego Coalition of Reason, which launches today. Funding has been provided by United CoR, the United Coalition of Reason. The billboard’s message is superimposed over an image of blue sky and fluffy white clouds.

For a hi-res photo of the billboard, free for media use, go to www.SanDiegoCoR.org.

This effort is part of a nationwide campaign that includes similar billboards announced yesterday in Cincinnati, Columbus and Cleveland, Ohio. Each billboard signifies the launch of a local, multi-organizational coalition of nontheistic groups. The stated aim of the campaign is to raise awareness about people who don’t believe in a god.

"The point of our national billboard campaign is to reach out to the millions of humanists, atheists and agnostics living in the United States," explained Fred Edwords, national director of the United Coalition of Reason. "Nontheists sometimes don’t realize there’s a community out there for them because they’re inundated with religious messages at every turn. So we hope this will serve as a beacon and let them know they aren’t alone."

But reaching out to nontheists isn’t the only goal of the campaign. "We are often misunderstood," added Debbie Skomer, coordinator of San Diego CoR. "In actual fact, we humanists, freethinkers, agnostics and atheists are essentially like anyone else. You’ll find us among your friends, neighbors, coworkers and family members. Some of us may quietly be sitting next to you in your place of worship. But now we are choosing to be as open about our values as you are."

As part of its national campaign, United CoR has launched ten advertising initiatives previously this year. Each has involved a billboard or public transit ads. Over the past two weeks they appeared in New York, New York; Newark, New Jersey; Boston, Massachusetts, and Chicago, Illinois. Earlier they were in Charleston, South Carolina; Dallas and Fort Worth, Texas; Des Moines, Iowa; Morgantown, West Virginia; New Orleans, Louisiana, and Phoenix, Arizona. Others will soon follow as the campaign continues to the end of the year.

The San Diego Coalition of Reason ( www.SanDiegoCoR.org ) is a collection of local organizations working together to increase public awareness of secular-minded groups throughout the San Diego area.