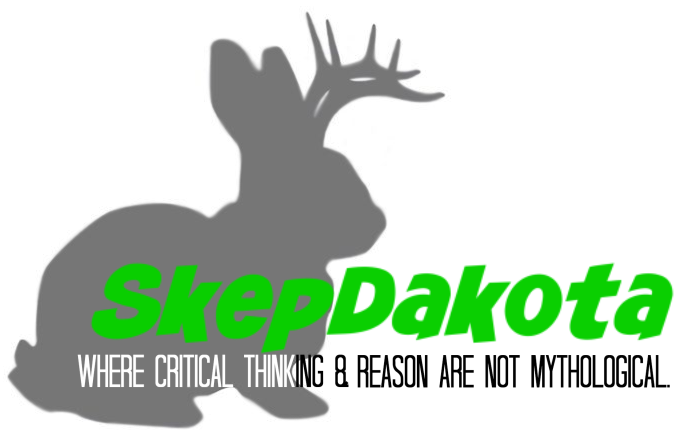 These words, superimposed over an image of Jesus holding a jackalope, now appear on a prominent 10’ x 21’ electronic billboard facing west at Russell Street and Minnesota Avenue in Downtown Sioux Falls. It will remain up from August 22nd through the 28th.

This conference is being held Friday evening, August 28, through Saturday, August 29, in Sioux Falls, South Dakota, at the Holiday Inn—downtown at 100 W. 8th Street, Sioux Falls, SD 57104. The theme is “Where Critical Thinking and Reason Are Not Mythological” and includes a lineup of national secular speakers and local activists. More information is available at www.skepdakota.com.

The billboard has been funded in part by the South Dakota Statewide Coalition of Reason, an alliance of seven atheist, freethought and humanist groups working together across the state. They are each listed and described at www.southdakotacor.org. This campaign is the latest in a nationwide effort.

“The point of our ongoing nationwide awareness campaign is to reach out to the millions of atheists and agnostics living in the United States,” explained Executive Director of the United Coalition of Reason. “Such non-theists sometimes don’t realize there’s a community for them because they’re inundated with religious messages at every turn. We hope our effort will serve as a beacon and let them know they aren’t alone.”

Reaching out to the like-minded isn’t the only goal of the coalition: “We hope people across South Dakota will discover we are a regular part of the community,” said Amanda Novotny, president of Siouxland Freethinkers, and featured conference speaker. “We live all over the state and are your friends and neighbors, family members and coworkers. You might even find some of us sitting next to you at community events.”

“Being visible is important to us,” Heap concluded, “because, in our society, atheists and agnostics don’t often know many people like themselves. Moreover, if traditionally religious people can be open about their views, why can’t we be open about ours?”

The South Dakota Coalition of Reason (www.SouthDakotaCoR.org) is a proactive partnership of seven atheist, freethought and humanist groups working together across the state to foster a sense of community among the like-minded and raise public awareness that people who don’t believe in a god can be upstanding citizens who contribute to the larger society.

The United Coalition of Reason (www.UnitedCoR.org) is made up of over 85 local coalitions nationwide and works to raise the visibility and sense of unity among non-theistic groups.