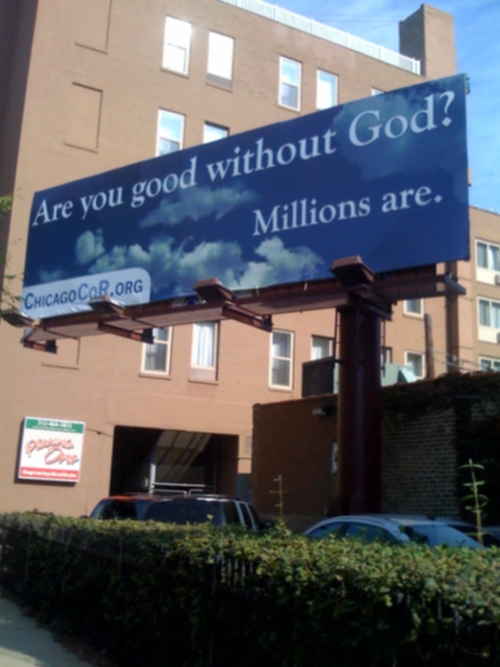 These words are part of a coordinated multi-organizational advertising campaign designed to raise awareness about people who don’t believe in a god. It fits into a nationwide effort that has now come to the Chicago area. The prominent ad appears on a downtown billboard at LaSalle Boulevard and Grand Avenue and can be read by those traveling north on LaSalle who will see it on their right (east side). Placed by the Chicago Coalition of Reason, with funding from the United Coalition of Reason, the billboard features an image of blue sky and clouds with the words superimposed over.

"The point of our national billboard campaign is to reach out to the millions of humanists, atheists and agnostics living in the United States," explained Fred Edwords, head of the United Coalition of Reason. "Nontheists sometimes don’t realize there’s a community out there for them because they’re inundated with religious messages at every turn. So we hope this will serve as a beacon and let them know they aren’t alone."

Reaching out to nontheists isn’t the only goal of the campaign. "We want people to know they can be good without belief in a god," said Hemant Mehta, coordinator of the Chicago Coalition of Reason. "There is a lot of misinformation out there about us. But we humanists, agnostics and atheists are as normal as anyone else. We’re your friends, neighbors and family members. We care about our communities and are true to our values."

The Chicago billboard officially launches Chicago CoR. It is also timed to coordinate with the launch of a new book called "Good Without God" by Greg Epstein, which is being released by William Morrow. Epstein, the humanist chaplain at Harvard University, is giving talks and holding a book signing the afternoon of October 26 at the Interfaith Youth Core Biannual Conference, Center for Civic Engagement, at Northwestern University in Evanston. The next day he will speak at the University of Chicago Hillel lunch at 12:00 Noon. At 5:30 PM that evening he will speak at the Harvard Club of Chicago. From 8:00 to 10:00 PM he will lead a discussion at the University of Chicago Chaplains Office, Divinity School.

The billboard is one of many that have appeared around the country this year. Billboards and transit system ads funded by the United Coalition of Reason have gone up in places as far flung as Charleston, South Carolina; Dallas and Fort Worth, Texas; Des Moines, Iowa; Morgantown, West Virginia; Phoenix, Arizona, and New Orleans, Louisiana. Subway ads will appear next week in New York City and a billboard will go up in New Brunswick, New Jersey. In a month, more are slated for California and elsewhere.

Click HERE for a high resolution version of the ad.

The Chicago Coalition of Reason ( www.chicagocor.org ) is a group of like-minded member organizations from throughout Chicagoland that share a worldview grounded in reason over superstition, and scientific truth over revealed truth.