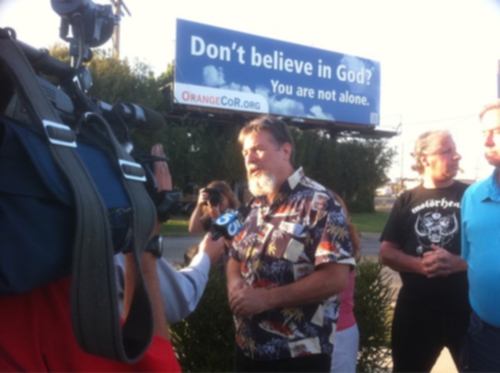 These words are appearing on a prominent billboard in Westminster on the west side of Beach (California Hwy. 39) at 19th Street, facing south. It will remain up through the Memorial Day weekend. The 14 by 48 foot billboard features the words superimposed over an image of a blue sky with clouds and is illuminated at night. It has been placed by the Orange County Coalition of Reason (Orange CoR) with $6,325.00 in funding from the United Coalition of Reason (UnitedCoR).

This ad campaign also marks the public launch of Orange CoR, a coalition made up of 13 Orange County atheist, freethought, humanist and religious liberty groups with activities ranging from social to educational and activist to charitable.

A major event for members of these groups, and for other nontheists, has been coordinated with the run of the billboard. It is the Orange County Freethought Alliance Conference being held at the Orange County Airport Hilton in Irvine on Sunday, May 15. Major speakers from California and around the nation will be featured. Details are online at http://www.freethoughtalliance.org/2011conf.html .

Beyond this, the Orange County billboard is part of a larger effort. Other billboards have been announced this week in Fresno, Modesto (Ripon) and Stockton, California. And since the spring of 2009 there have been similar ad campaigns in Sacramento and San Diego as well as Arizona, Arkansas, Colorado, the District of Columbia, Florida, Illinois, Iowa, Kentucky, Louisiana, Maryland, Massachusetts, Michigan, Minnesota, Missouri, New Jersey, New York, Ohio, Oklahoma, Oregon, Pennsylvania, Texas, Washington, and West Virginia.

"The point of our ongoing nationwide awareness campaign is to reach out to the millions of atheists and agnostics living in the United States," explained Fred Edwords, national director of the United Coalition of Reason. "Such nontheists sometimes don’t realize there’s a community for them because they’re inundated with religious messages at every turn. We hope our effort will serve as a beacon and let them know they aren’t alone."

Reaching out to the like minded isn’t the only goal of the effort. "We hope people will discover that one can be good while being godless,” said Bruce Gleason, coordinator of Orange CoR. "After all, you’ll find people like us throughout the country. We’re your friends and family members, your neighbors and coworkers.”

Edwords added: "All the billboards going up this week also celebrate the National Day of Reason on May 5, an alternative observance to the National Day of Prayer. And they will remain up even after the supposed Rapture that a few have predicted for May 21."

For a hi-res image of the billboard, free for media use, see the right sidebar.

The Orange County Coalition of Reason is a collection of 13 atheist, freethought, humanist and religious liberty groups working together to increase awareness of nontheist issues and foster community among members.

The United Coalition of Reason is made up of over 40 local coalitions nationwide and works to raise the visibility and sense of unity among nontheistic groups by promoting cooperation and providing funding and expertise.