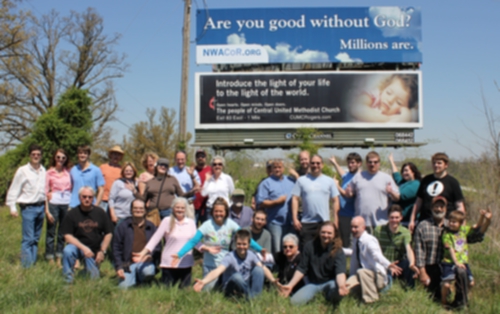 These words are part of prominent bus ads and a billboard in Fayetteville, Arkansas. The bus ads are slated to appear today on the sides and rear of four Ozark Regional Transit buses, constituting 12 ads in all. And the 10 x 40 foot billboard is already up on the I-540 bypass less than half a mile south of Wagon Wheel Road. It can be seen on the west side, facing south (Billboard #068442).

Beyond this, the Fayetteville ad campaign is part of a national effort. Already this year there have been similar bus ads or billboards in Des Moines, Detroit, Jacksonville, St. Augustine, St. Petersburg, Tampa, Tucson, Sacramento and Seattle. Last year, there were United CoR-sponsored billboard, bus, and subway ads in 20 cities, including Boston, New York, Philadelphia, Baltimore, Chicago, Cincinnati, Dallas, Tulsa, Phoenix and San Diego. But Fayetteville is the first city in the nation to have both bus ads and a billboard together.

"The point of our nationwide awareness campaign is to reach out to the millions of atheists, agnostics, freethinkers and humanists living in the United States," explained Fred Edwords, national director of the United Coalition of Reason. "Nonreligious people sometimes don’t realize there’s a community out there for them because they’re inundated with religious messages at every turn–including an unexpected one right below our billboard. So we hope this will serve as a beacon and let them know they aren’t alone."

Reaching out to the like minded isn’t the only goal of the effort. "We also want everyone to know that those of us who don’t believe in a supreme being happen to be your neighbors," added Randall Fleck, coordinator of NWA CoR. "Folks like us can be found everywhere. We’re family members, friends and coworkers. One of us might even be in the pew next to you in church. So it’s about time we started talking about our views, just as others talk about theirs."

For more details on the Northwest Arkansas campaign and for hi-res images of the ads, free for media use, see the right sidebar .

The United Coalition of Reason ( UnitedCoR.org ) exists to raise the visibility and sense of unity among local groups in the community of reason by providing funding and expertise to help them cooperate toward the goal of raising their public profiles.