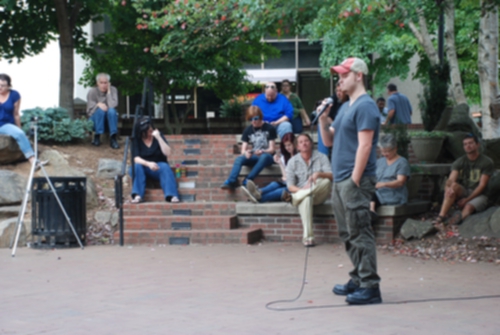 (Asheville, North Carolina, September 16, 2013) A 5:00 PM surprise public event unfolded Sunday in Asheville’s Prichard Park as Daxx Green made a “secular altar call.” This call had followed a short speech to the crowd. Identifying himself as an atheist in the Bible belt who is tired of being invisible, he asked those within the sound of his voice to declare their nontheistic worldviews or come forward and tell their stories.

And many immediately did.

Filtered among the crowd were members of the following Asheville area nontheistic groups:

These five groups had come together to form the Western North Carolina Coalition of Reason (WNC CoR), an alliance focused on raising the public profile of nonreligious people and organizations in this part of the state. The oudoor event marked the formal launch of the coalition.

Fifteen members of the various groups, and others in the crowd, loudly proclaimed their atheism, agnosticism, freethought or humanism. Three teens and one eight year old spoke about being bullied for their non-belief. Many people passing through the park showed reactions of surprise and curiosity.

Photos can be found in the right sidebar.

The event was all part of a growing nationwide effort to encourage secular people to "come out" publicly.

"This is how we can begin to remove the stigma attached to the nonreligious," said Geri Weaver, coordinator of WNC CoR. In an earlier statement to the media she had declared, "Our goal is to demonstrate that we are here, our numbers are growing, and we are not afraid to stand out."

Another purpose of the effort was spelled out by Fred Edwords, national director of the United Coalition of Reason (UnitedCoR) in Washington DC.

"The point of our national awareness campaign is to reach out to the millions of humanists, atheists and agnostics living in the United States. Nontheists sometimes don't realize there's a community for them because they're inundated with religious messages at every turn."

UnitedCoR organized the WNC coalition and is covering the expenses of the Prichard Park event.

Next month "Coming Out" will be the theme of the annual Carolinas Secular Conference. It will be held October 4-6 in Charlotte, North Carolina. Details are available online at http://www.carolinassecularconference.org

The Western North Carolina Coalition of Reason ( www.WNCcor.org ) is an alliance of secular-oriented organizations in the Asheville area that represent a worldview grounded in reason over superstition and scientific evidence over revealed truth.

The United Coalition of Reason ( www.UnitedCoR.org ) works to raise the visibility and sense of unity among local groups in the community of reason by providing funding and expertise to help them cooperate toward common goals. It was founded in 2009.