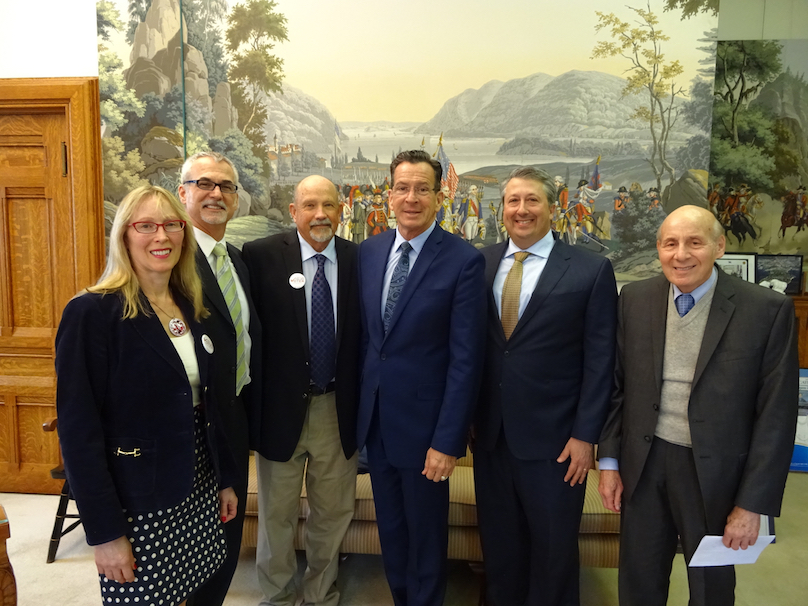 On Tuesday, May 9th, members of the Secular Coalition for Connecticut and the Connecticut Coalition of Reason met with Governor Dannel P. Malloy. The purpose of the meeting was to thank the Governor for his service to Connecticut, introduce him to our very large and thriving secular community, and ask him to recognize us.

We are grateful to the Governor for his accommodating this meeting. He was both cordial and receptive. We thanked him for his service and progressive accomplishments during his tenure and for his continued efforts to endorse progressive efforts that include all of Connecticut’s residents.

We relayed to the Governor some facts about the non-religious state of Connecticut and left him a hard copy of our “Secular Briefing” document with the details and references. We discussed issues that we raised at our Lobby Day and we also shared our concerns about Trump and his latest executive order reducing enforcement against 501(c)3 religious organizations that violate state/church separation laws. In addition, we discussed our concern about what other pro-religious privilege (which creates anti-freedom) orders Trump might sign. Given our concerns, we requested that the Governor do what he can to recognize the very large and thriving non-religious and Atheist/Humanist/Freethinker community in Connecticut and so he agreed to at least sign our Darwin Day proclamation next February.

Governor, thank you for meeting with us. We look forward to our continued engagement throughout the remainder of your term and we are grateful for your service to the people of Connecticut.