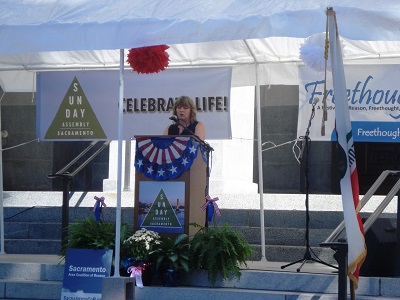 With the phrase, “Freethought is the first step of a growing mind,” UnitedCoR’s Education Officer and National Coordinatorestablished her first meme during her first public address in America at the Sacramento Freethought Day on Sunday, October 11, 2015. On a beautiful morning, the Sunday Assembly—Sacramento gathered on the southern steps of the California state capitol  to live better, help often and wonder more, and to prepare for the remainder of the day’s activities.

The Beatles’ award-winning song from 1967, “With a Little Help From My Friends” began the morning’s festivities—almost as if it was announcing the forthcoming address from a fellow Liverpudlian, and supporter of the British Humanist Association and Merseyside Skeptics Society. This wasn’t the first time that UnitedCoR has collaborated with Susan, as she had assisted with some “trans-Atlantic At The Movies” film reviews such as Selma, The Imitation Game, The Theory of Everything, and Pride.

However, this was Susan’s first public address to an American audience, and she expressed her appreciation and gratitude for the warm response that she received in California:

“I felt welcomed to Sacramento Freethought Day—not because I was a different speaker with a different perspective on life, but because I was speaking about education and hope for the future: this seemed to resonate with many families with children.  As I’ve lived, worked and traveled to over forty countries, many folks were interested in these experiences. Lots of people at the Freethought Day came up to me to tell me of places they had been, things they had seen, and it was like we were sharing in each others’ travels and experiences.”

Susan also spoke highly of the sense of humor of the Californian crowd.

“Someone actually talked to me about “the beautiful game” and when I realized they were talking about British premier football—and not NFL—we immediately clicked, despite the fact that he teased me about my support of Liverpool Football Club and not Everton Football Club…or especially Manchester United. He also told me of how he had to explain that the term ‘atheist’ in America is often misconstrued to incorrectly imply or infer that a person has no morals, whereas in Britain, when we hear  the term ‘atheist,’ and it doesn’t carry this kind of emotive baggage.”

Susan also mentioned that the light-hearted jokes and atmosphere from the Freethought Day attendees and participants allowed for the exchange of new ideas, thereby creating a feeling of harmony and unity, which made for a wonderful day for everyone.

More than anything, the children—and the families of children—who attended the Sacramento Freethought Day, were at the heart of Susan’s message of hope.

“All the parents who spoke to me during the event were keen to ensure that their children were taught how to think critically—to be able to look at and analyze the information that they are told. Children will always be influenced by the people and the environment that surrounds them. We cannot change this, but what we can do is to give them the skills to analyze and evaluate information to think freely and be free to reason.”