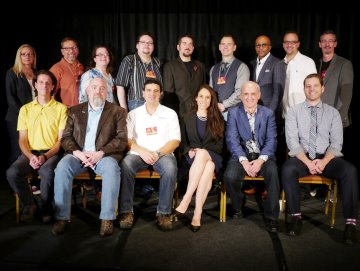 From November 6—8, the Florida Humanist Association’s conference drew freethinkers from all over Florida into Orlando to celebrate freethought, even in the middle of a Bible belt state. One person from Marietta, GA braved 10 long hours of traffic to be able to join with others of like mind, to enjoy an evening of karaoke, live piano music, trivia and great company. Among the many speakers for the conference were some of UnitedCoR’s cooperating national groups, such as David Tamayo (President of Hispanic American Freethinkers), Andrew Seidel and Dan Barker (Freedom From Religion Foundation), as well as UnitedCoR’s Executive Director who spoke of education and the need for critical thought in the nontheistic movement.

The weekend started with FreeFlo’s silent auction, which kept people coming and going into the main room in an effort to out-bid each other for a variety of donated items. The exhibition hall was buzzing with activity with booths sponsored by BE Orlando, Camp Quest, three groups from the Secular Student Alliance, UnitedCoR and Ex-Muslims of North America, among others.

Within the packed exhibition hall and in-between sessions, I had an opportunity to listen to UnitedCoR’s Executive Director have theological and ministerial conversations with Dr. Anthony Pinn—both of whom earned MDiv degrees and were former Christian ministers. Of particular interest to me during their discussion was how they viewed the “historic Black church” in light of recent statistics demonstrating that Christianity has remained constant within African-American communities, despite an increase in people who profess no religious preference. Both UnitedCoR’s Executive Director and Anthony agreed that the upcoming 5th Anniversary celebration of Black Nonbelievers, Inc. should be considered important, as it represents the strength of African-American women and men who are prepared to proclaim their independence from historic traditions and expectations. (The anniversary celebration is scheduled for Atlanta…only 20 miles from Marietta!)

Congratulations to Orlando CoR’s David and Jocelyn Williamson and the great team of volunteers who packed the house for FreeFlo 2015!