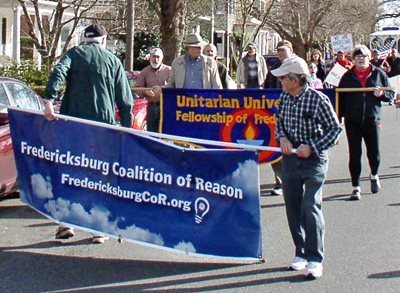 The Fredericksburg Coalition of Reason participated in the 2016 City of Fredericksburg’s outdoor celebration of Religious Freedom Day, and then went on to co-sponsor a second celebration in a local library with the University of Mary Washington’s Department of Classics, Philosophy, and Religion. People of Fredericksburg believe that the 1777 freedom of Religion Statute was written in Fredericksburg in a meeting of Thomas Jefferson and George Mason, and even believe they know the location of the tavern where it was composed and can point it out to tourists. Historians say that just may be possible because it is known that Jefferson and Mason did meet in Fredericksburg prior to the General Assembly meeting that enacted it. 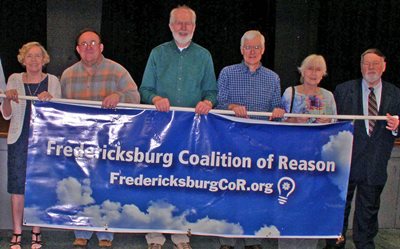 Religious Freedom Day is observed in recognition of the Virginia Statute of Freedom of Religion, written in 1777 and enacted by the Virginia Assembly in 1779. It is claimed that the Virginia Statute was the world’s first religious freedom law and it is known that is the precursor to the religious freedom clause of the first amendment to the U. S. Constitution. The city celebration was held on January 10th and started with a parade through downtown to the Thomas Jefferson Religious Freedom Monument where the city mayor and other dignitaries spoke and then observed a wreath laying rite conducted by the Saint Thomas parish Knights of Columbus in uniform including ceremonial swords. In addition to the Catholic parish members, a diversity of Protestant, Unitarian-Universalist, and Muslim groups, as well as the Fredericksburg CoR paraded and displayed banners during the ceremony at the monument. 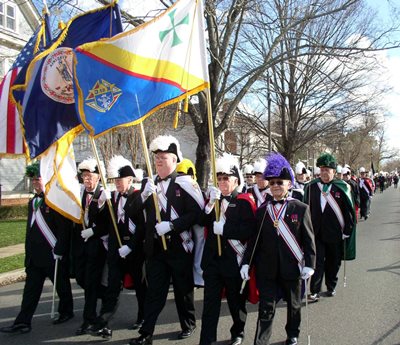 Immediately after the ceremony, many attendees welcomed the chance to get indoors out of the cold to participate in a second public celebration of Religious Freedom Day at a local library.  Attendees met co-sponsors, heard an essay contest winning entry read aloud, listened to a keynote talk, and share refreshments. As many in attendance were church-goers and had no contacts with our non-theistic groups, Fredericksburg CoR Coordinator Pat Chen introduced and explained the work of Coalition members Fredericksburg Secular Humanists (FSH) Fredericksburg Skeptics, and Reading Skeptically book club. Mary Washington University professor Dr. Craig Vasey told of his Department’s interest in religious freedom and then described the essay contest his department conducted for students on “Why Freedom of Religion is Important Today”.  Twenty-three students entered and Dr. Vasey introduced the winner, Lisa Johnson, a graduate student in the Department of Education, who read her essay aloud to the attendees.  After applause from the audience, local FSH member Fred McCoy presented Ms. Johnson with the promised $750 prize made possible by the Fredericksburg Secular Humanists—an affiliate of the Fredericksburg COR.

Dr. Emile Lester, from the University of the Mary Washington’s Department of Political Science, told of his participation with the Texas Freedom Network’s testimony concerning the state’s board to select school texts. His talk, “Holy Moses!  The Founders and Religion in Texas Textbooks,” was named after the Network’s objection to the Texas board’s approval of the “factual” statement that “Moses was the first American.” They wanted to teach students that the U. S. was founded on Biblical principles which they say began with the Ten Commandments handed down by Moses!  Dr. Lester, himself Jewish, was one of the experts called by the Network to testify in hearings in opposition to non-scholar Evangelical “experts” called by members of the board. After his keynote talk, which included numerous examples of right-wing Christian bias and some blatant errors in the selected textbooks, Dr. Lester entertained questions and comments from the audience which included Secular, Christian, Jewish, and Muslim attendees. The indoor celebration ended with refreshments and dialogue among attendees until library closing time.

A key paragraph in Ms. Johnson’s winning essay was: “Religious freedom no longer just applies to the various Christian denominations present in the United States’ early years. Baha’is, Muslims, Secular Humanists, Jews, Raelists Nuwaubianists, Chen Taos, Scientologists, Atheists, and countless other religions and ideologies coexist. Such diversity of beliefs has the potential to lead to prejudice and turmoil that we must resist to ensure that religious freedom can optimally pursue. I have engaged in countless conversations in which others have argued that such diversity is diluting the central morals and principal values on which our country was founded. I, too, feel that our central morals and principal values are in danger, not because of religious diversity, but rather, because of the prejudice against it.”