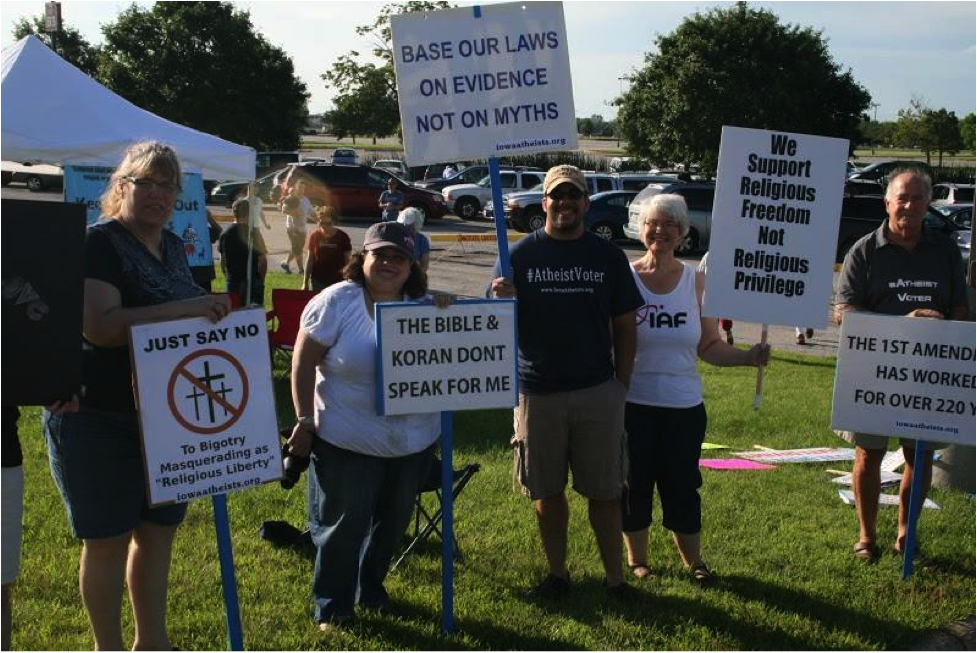 The peaceful demonstration of the Fourth Annual Family Leadership Summit on Saturday, July 18 was a great success! The Summit was sponsored by The Family Leader, whose mission statement calls upon its followers to “Strengthen families, by inspiring Christ-like leadership in the home, the church, and the government.” Ten of the (then) fifteen 2016 Republican presidential candidates were speakers at this year’s event, and none of them issued apologies for pandering to their evangelical audience. Our message for the demonstration was “Religious liberty means religious liberty for everyone—not religious privilege for the few.” Thirty-three members of the Iowa secular community withstood the 90-degree plus temperatures and high humidity to make a stand for this cause!

For those not aware, because of Iowa’s first in the nation caucuses, we receive the earliest of attention from potential presidential candidates, starting nearly as soon as the last election is over. Last year in particular, we saw many of the candidates “testing the waters” in Iowa. The 2016 campaign cycle began in earnest with the first events in January of this year: we are subjected to television and print advertising, billboards and “stumping” by the candidates nearly two years before Election Day!

This was the third annual demonstration of the Summit by Central Iowa CoR member Iowa Atheists & Freethinkers. We were also joined by many other Iowa atheists, humanists and non-believers. Other groups in attendance were; Iowa State University Atheist & Agnostic Society (ISU AAS) and the Humanist Society of Iowa. ISU AAS faculty advisor—author and professor of Biblical Studies, Dr. Hector Avalos—honored us by spending some time at the demonstration. We also had three other Coalitions represented: Eastern Iowa CoR, with Coordinator Roxanne Gissler and members of the Humanists of Linn County; and Thomas Gray, Coordinator of the Omaha CoR; along with members of the Omaha Atheists and R.E.A.S.O.N. However, driving the longest distance (well over 4 hours!) were Eric and Amanda Novotny: Coordinator of the South Dakota CoR and President of the Siouxland Freethinkers, respectively. It was an amazing experience to have so much support from both the United CoR itself in promoting our event and with our neighboring coalitions!

Not only did we attract the attention of the local media, but a few of us were also able to gain access to the Summit itself and report on what we observed via Facebook and Twitter. Many of the major Iowa newspapers interviewed some of the demonstrators and the articles have been picked up from as far away as the NYC Atheists to the Secular Coalition for Hawaii.

Additionally, Amanda Knief (National Legal and Public Policy Director of the American Atheists) personally flew into town to assist us, and was surprised to easily obtain a press pass to the Summit. Representing an atheistic perspective, she had the opportunity to ask direct questions to candidates Ben Carson, Rick Santorum and Donald Trump during the Q&A sessions. The American Atheists gave us their full support, and several of us sported shirts with the #AtheistVoter hashtag, which we used to relay remarks made by the speakers. Of course, no one had any idea that Donald Trump would upstage everyone with his controversial statements!

The organizers from The Family Leader came out to speak to us during the lunch break and also recognized that we had demonstrated there for three consecutive years. There were no hard feelings at all: in fact, they provided us free box lunches!