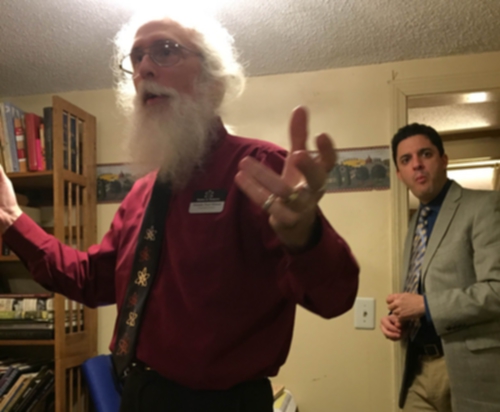 American Atheist President, David Silverman, brought Firebrand Atheism back to Connecticut on Saturday.  The last time David spoke to a group in Connecticut, it was in front of over 100 people at the Secular Assembly for the North East (SANE http://saneonline.org/, https://www.youtube.com/watch?v=80UPAsefI3M) conference in October of 2013.  This time the setting was much more intimate.  CT State Director for the American Atheists, Dennis Paul Himes, hosted David and over 25 godless friends at his home in Vernon.

David reminded the group about the tenants of Firebrand Atheism: 1) Don't be a "dick" [Don't attack the person, attack the idea.  The person has been brainwashed/injured by religion.  It's not their fault.], 2) Tell the truth, as often as possible [religion is a lie – all of it, gods are false – all of them, respect is earned, and religion hasn't earned any. Belief does not warrant respect.], 3) Don’t feign respect for the unrespectable (see point 2), 4) Don’t accept inequality (privilege) as acceptable, even if it is the norm (see Point 3), 5) If someone claims to be offended by the truth, it’s because they are used to privilege and inequality. Do not let "I'm offended by your words" silence you. Clarify that it's their beliefs, not the people, with which you take issue (See point 4), 6) If someone tries to limit freedom using religion, do points 1-5, only louder.

David also talked about his plan for normalizing Atheism in society by raising awareness and the level of conversation in the US.  His approach is sometimes seen as offending the majority (i.e., christians in the US), however his approach (billboards, appearances on FoxNews, etc) never attacks indivuals, only the idea of religion.  He presented data using Google analytics on the search for terms such as "Atheism" over time with peaks correlating to activities such as the American Atheist christmas billboards, London bus placards, and book launches.  David suggests that the data correlates with the normalization of Atheism in America as the search baseline is rising over time.

When asked how the averge Atheists on the street can help, David said to always use the word "Atheist" when describing yourself so that the average comfort level with "Atheists" increases in society and also follow the tenants of Firebrand Atheism (above).  David also asked the group to donate to American Atheists if they can (https://atheists.org/donate).  By donating "you are purchasing activism and changing the the country for the better."  "Theists liking us is not the objective.  Equality is the objective."