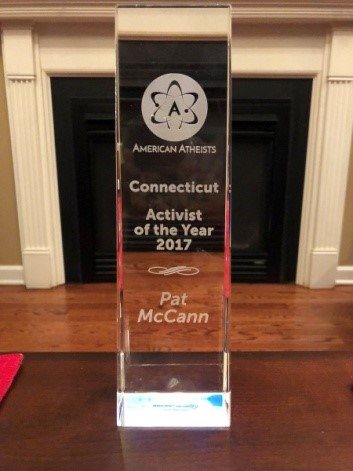 by Susann
National Coordinator and Education Officer–United Coalition of Reason

Pat’s activism within Connecticut is well-known and highly respected. Pat is the immediate past President of the Hartford Area Humanists, the Former co-chair of the Connecticut Coalition of Reason, the current chair of the Secular Coalition for Connecticut, and has also recently volunteered to serve as the Assistant State Director (Connecticut) for American Atheists. Knowing that Pat has been highly active and influential with his commitment to volunteering and activism with secular communities across the entire state of Connecticut, I wrote to some of Pat’s family and friends to learn more about what he’s done that has made a difference to grassroots secular groups.

Tanya Barrett of the Connecticut Valley Atheists said, “Pat has been a huge part of the atheist movement in Connecticut, and he is one of the main reasons that the Connecticut CoR profile has risen in with our state legislature and government. He is certainly a religious activist’s worst nightmare: he’s smart, well-spoken, never gets mad, and he never gives up. His creativity and professionalism shine through in every project he undertakes, from organizing conferences and lobby days to working on a state Darwin Day proclamation. Pat and Elisabeth are also some of the most gracious hosts, making new and long-term members feel welcome at every event they attend. It is an honor to work with him in the atheist movement, and he is incredibly deserving of the Connecticut Activist of the Year award from American Atheists.” 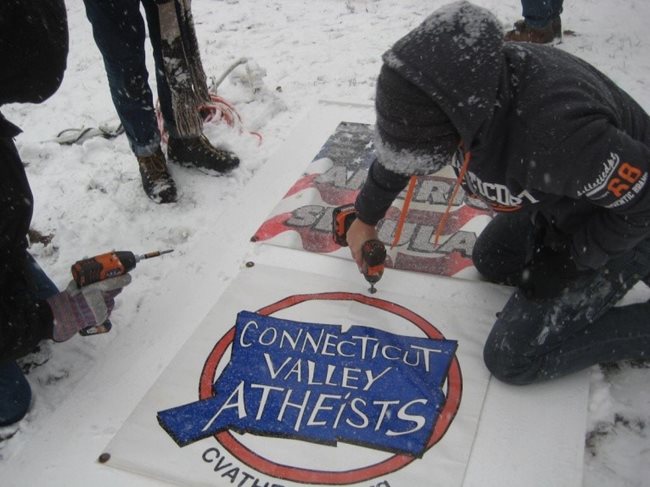 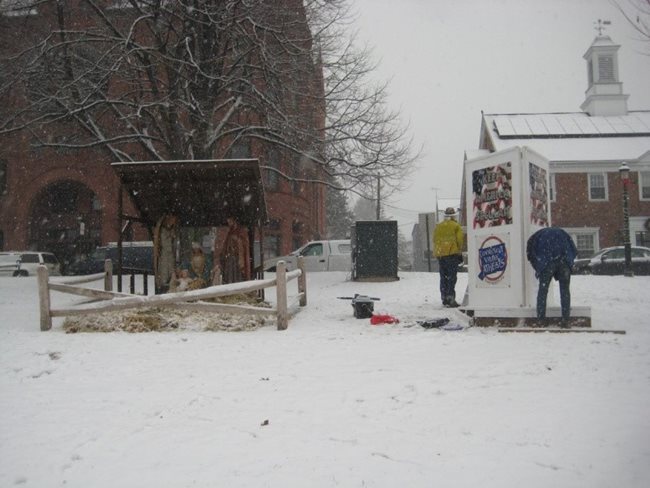 John Levin, whose work with the Secular Coalition for Connecticut brings him in contact with elected officials across the state, complimented Pat’s support for secular values political activism. “Pat has been completely indefatigable as our leader in Connecticut.  He shows up at our annual Darwin Day dinners, kicks ass on the science quizzes, asks the best questions of the Yale professor speakers, films the entire event, then, with Elisabeth, drives the 500 miles back to his  home in northern Connecticut (so I overestimated it “just a bit…”), and still makes it to church the next morning (just a joke, Pat…)! Or is it Sunday morning Dojo? Whatever. Yes, Pat McCann—he is both the tusks and the testicles of the mighty elephant that is the secular movement in Connecticut.”

Of all the people in Connecticut, the one who knows Pat best is his partner and the love of his life—Elisabeth Brown. Elisabeth recalled some of Pat’s achievements:

“When Pat found out that Professor Richard Dawkins was coming to the Bushnell in Hartford this November, he reached out to Robyn Blumner (CEO of Center for Inquiry/Richard Dawkins Foundation for Reason and Science) to see if they needed volunteers for the event.  Eight of us from Connecticut CoR volunteered to host a table for the Center for Inquiry and were allowed to include information for both Connecticut CoR and the Secular Coalition for Connecticut.

In March of 2017, Pat organized the Connecticut Secular Advocacy Day at the State Capitol and spent an extraordinary amount of his time and personal money on this event. This was a Lobby Day event for the three key pieces of legislation that our organizations are trying to get passed in CT. Amanda Knief (former National Legal and Public Policy Director of American Atheists) came to train our citizen lobbyists. 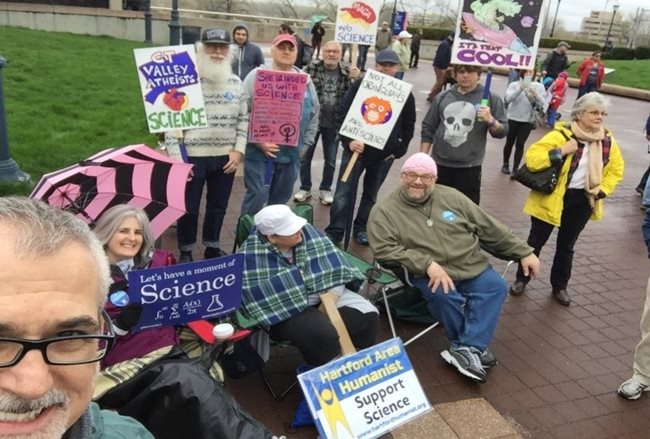 In May of 2017, Pat was able to secure a face-to-face meeting with our Governor—the Honourable Dannel P. Malloy—to introduce him to members of Connecticut’s vast secular communities, to familiarize him with the legislation we are trying to get passed, and to ask him to sign a Darwin Day Proclamation. Pat drafted a Secular Briefing Document for this meeting, which the Secular Coalition for America is going to use as a model document for similar such meetings throughout the country.

In the Fall of 2016 when Pat found out that the Bushnell Theater was hosting an event called Religion in America hosted by The CT Forum and they did not have a non-religious person on the panel, he contacted them immediately and gave them facts and numbers about the secular community and suggested that they include a non-religious person as part of the panel discussion…which they did!  Not only that, but we were also allowed to table at the event on behalf of the Connecticut CoR and SCCT.  Over two thousand people attended this event…it might have been the first time for some of the attendees to sit and listen respectfully to atheist viewpoints in this kind of forum. Just a couple of months previously, Pat also organized a protest against Franklin Graham’s visit to Hartford, CT, and we remember that people from UnitedCoR also came up from Washington, DC to join us with our protest.

Pat and I recently met a woman who is trying to get a MeetUp group started.  She is a burn victim (and she is courageously working to overcome some severe disabilities due to her physical condition) who is unable to get out to attend events/meetings. After meeting her, Pat and I began to brainstorm how we could help her connect with others in Connecticut’s secular communities. We came up with the brilliant idea of contacting Jase in UnitedCoR for help with this. Pat will be doing an interview with her early next year (after she has a risky surgical procedure) and will be trying to help her set up a virtual atheist group for those who are handicapped, shut-in, agoraphobic, or otherwise isolated: we don’t want anyone to feel as if they are alone, regardless of physical challenges. 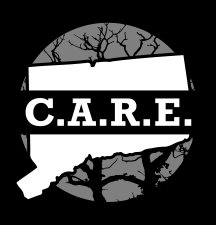 Pat also likes to see like-minded people make connections and develop stronger ties together. For the past five years, we’ve hosted a Winter Solstice/HumanLight Open House in our home to bring secular members of the various Connecticut CoR cooperating groups together to socialize, celebrate and collect well-needed donations for the Connecticut Food Bank. Pat was an organizer for two CT secular conferences: SANE in 2013 and CARE (Connecticut Assembly for Reason and Ethics) in 2016. Every year, Pat also donates generously to local, state and nation secular charities.”

Knowing how much Pat McCann has done for so many secular communities across Connecticut, it’s no wonder that his friends and family have held him in such high regard. UnitedCoR wishes to extend special congratulations to Pat for his recent award and recognition and we’re looking forward to receiving great news of secular outreach and achievement there in Connecticut.

If there are local leaders and high-achievers in your area that you would like for us to highlight and celebrate in our upcoming global newsletters, please email me and we’ll help you write an article similar to this, so that your local activists, volunteers and organizations are recognized for their commitment and hard work.