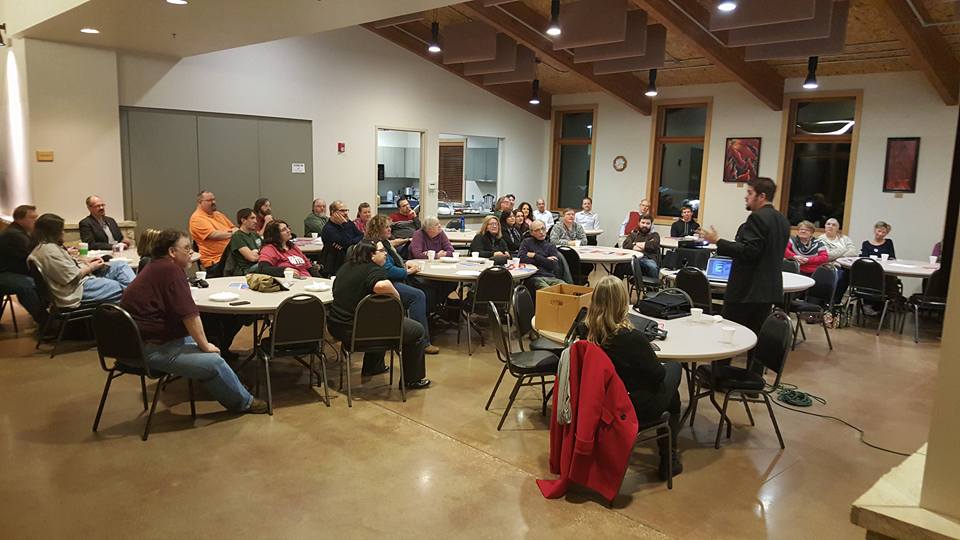 The evening began with Justin Scott and Bob Ready speaking for the Secular Coalition for Iowa and Camp Quest. Justin talked about the effort to get people involved with the Iowa Caucuses. He noted that planks will be made available to all those going to caucus and urged everyone to join the Secular Coalition for Iowa’s Action Network. Bob informed the group that they will be doing fundraising in the state to have a Camp Quest Iowa in 2017. He also talked about the June 4th Reason Rally in Washington D.C. and the goal of chartering a bus to bring participants of the Iowa secular group to the rally and the advocacy day the Thursday before.

UnitedCoR’s Executive Director then gave his presentation concerning Humanist Chaplains serving in the military chaplaincy. UnitedCoR’s Executive Director impressed upon the group that Humanists and other non-theists are serving in the military right now and their needs are not being met. Humanists and other non-theists have different needs than theists and, as things stand now, they do not have the option of speaking with a chaplain who understands their world view. Former military members in the audience noted that a service member’s career can suffer if he or she seeks the assistance of a psychologist as theists so often recommend. According to the veterans, consultations psychologists goes into their record, while speaking with clergy does not. Also, psychological visits can serve as basis to deny promotion. It is plain that this is an issue all non-theists, as well as theists who believe all military men and women should have access to the same services, should care about and address with their political representatives.

The evening ended with a rousing game of, “Who Wants to be a Millionaire – Atheist Version” which provided a lot of laughs and surprising answers. Eastern Iowa Coalition of Reason wishes to thank everyone who came out on a cold Iowa night, especially UnitedCoR’s Executive Director and UnitedCoR’s Education Officer and National Coordinator. We look forward to more events inclusive of all CoR groups in Iowa!