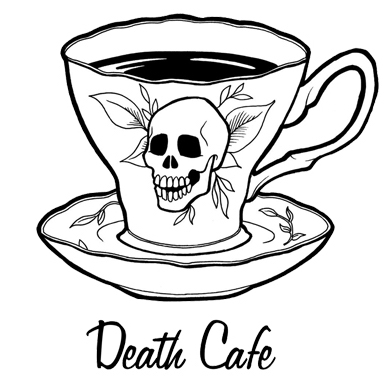 This October and through March 2017 Humanist organizations will be raising the living to talk about death, dying and the meaning of life at Death Cafes throughout Connecticut. Humanist Celebrants Dan Blinn, Anita Peters and Yale Humanist Chaplain Chris Stedman are inviting the public to engage in friendly conversation, eat cake, drink a cup o’joe, and talk about death.

Death Cafés are part of a life affirming international movement to encourage people to gather in social settings and have honest and frank conversations about death. In 2015 there were 1500 death cafes in 33 countries. “Our goal,” said Dan Blinn, the founding President of Hartford Area Humanists and one of the organizers of the events, “is to increase awareness of death with a view to helping people make the most of their lives.”

“Every discussion is different and often covers several topics” said co-organizer Anita Peters, a founding member of Humanists and Freethinkers of Fairfield County. Peters said that her first Death Café’s topics ranged from an animated discussion about whether the last wishes of the deceased should be honored to a poignant recognition by one participant that his fear of dying was really a fear of dying alone.

Chris Stedman, Executive Director of the Yale Humanist Community, is including a Death Café as part of his organization’s year-long series on How to Be a Human. “Death is a part of life,” said Stedman, “and by talking about death, we can’t help but talk about how we live.”

The first event will be on October 10th at 6:30 PM at the Silver Star Diner in Norwalk. The next event will be on October 13th at the Triple A Restaurant in East Hartford. Other events will be scheduled throughout the state over the next six months, including the Death Café at The Grove in New Haven at 3 PM on March 26, which will be preceded at 1 PM by “How to Approach Death,” a lecture by Ann Neumann, scholar and author of The Good Death: An Exploration of Dying in America (Beacon Press, 2016). The public is welcome to attend the events without charge.