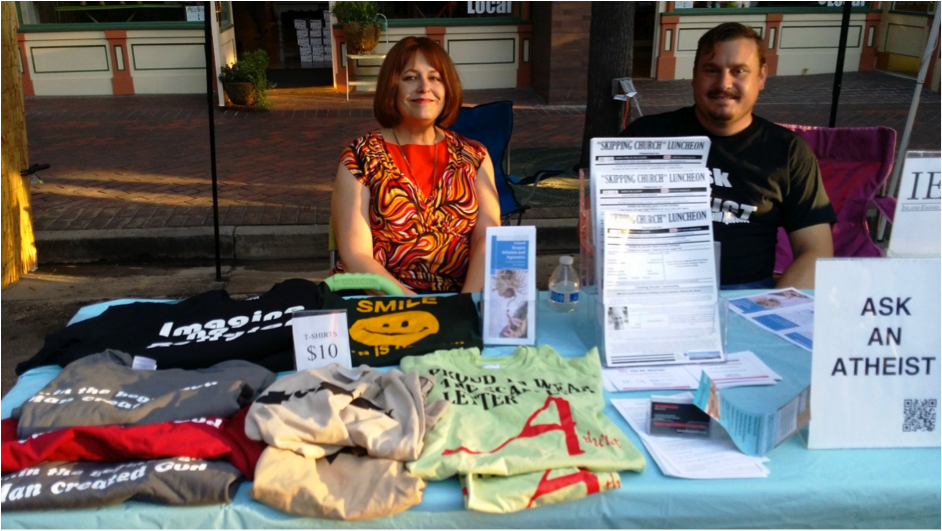 The Inland Empire CoR in Redlands, CA had their launch in mid-January 2015. However, since this time, they hit the ground running and have already made a tremendous impact on their local community. They’ve also taken their visibility to local events, such as a recent community event with their first “Ask An Atheist” booth. Equipped with t-shirts, leaflets from a variety of national, state and local organizations, plus some new materials provided by UnitedCoR, friendly atheists within the CoR greeted passers-by and gave a solid and welcoming first impression of nontheism. Let’s hear from their Media Representative, Rebecca Kitchings and Greg McKinley-Powell, one of their founding members:

A vibrant lane of small-time entrepreneurs and religious groups bustling about and setting up their soapboxes noticed me and my bag of Humanist, Atheist and Inland Empire Atheists and Agnostics literature as I struck down the busy street looking for our Coalition of Reason booth site. Traffic had delayed us for a few minutes so I got my first taste of the fundamentalist booths before Greg could warn me about them from his own prior experience. I didn’t stop at any religious booths, but just went straight to our spot to wait for Greg and the booth supplies so we could quickly set up. There were already a lot of people milling around and buying. It turns out that we, in the Inland Empire, have created a mini-Bible belt through this area so it is a lot like the Deep South where I grew up in Jackson, Mississippi.

Those “Instant-Up” shade tents really are what they say they are. Greg got the new banner UnitedCoR had given us and he cleverly and attractively attached it to a custom made sign holder constructed of white, plastic irrigation pipes. All in all, the booth looked welcoming. It certainly attracted a lot of attention: some good and some not. Not only were there the typical creationist sects in sophisticated booth set-ups, but there were also the ones who walked around and evangelized. One of the latter came by later in the evening and he hid his book he kept whipping out to read heavily marked passages from. It looked like a secular text book for a college course because it was a slick, paperback Bible, not the usual ornate kind a Sunday church-goer would carry. He denied being a Christian, Jew or Muslim with his text book Bible; he identified as Native American. The lady in the handcrafted Items booth next to ours came over and made sure I knew to call a guard because the young man apparently wouldn’t go away from any of the religious stalls there either until forced to by Market Night authorities.

While the traveling preacher was troublesome, the man in his 60s on the bar stool positioned high above his collection of the four younger men who sat around his feet was much worse. The walking preacher was obviously a little off, but this man sounded reasonable if not a small amount pushy and smug, as he exhibited his debate rhetoric for his young minions. He seemed to be completely aware of the fallacy of “someone finds a clock on the beach,” yet continued to push through my objections to his flawed reasoning recitation, loudly continuing his self-gratifying speech he had concocted that was the same as the “person finds a clock on the beach” simile that has been unsuccessfully used to support “Intelligent Design.” Knowing his own argument was flawed, was obvious by his responses to both my and Greg’s description of his unrelenting thumping in our face at our stall. Although we asked him and his watching party to leave, it barely got through to him but it did, and one remaining minion had one last go at us. Even though we told them from the very beginning that we were only there to connect with the like-minded and let them know a community exists and not to debate the existence or lack of a deity, it didn’t slow them at all. Some “polite” passers-by shook their head sadly and said they would pray for us. A few were “very sad for us and where we were going to go when we died and then it would be too late. Very sad….”

Despite all the less-friendly treatment from some we had a young man who took a picture of the booth for his girlfriend that was out of town, because she wanted to join an atheist group and didn’t know of one. We also had a man buy his 9 year old daughter a “Smile there is no hell” smiley face tee shirt. There were several who had seen the big sign on the highway in February, “Don’t believe in God? You are not alone” and seemed very happy to make contact and take some literature. Several women wanted information about our “Girl’s Night Out” program that is led by Greg’s wife Charlene, and folks laughed at the “Skipping Church” name for our “Distinguished Speakers Series.” An older teenager held a younger teenager’s hand, as the one led the other over. His parents are conservative Christians and already have kicked him out a couple times because he is gay and he is terrified what will happen when they find out is he is atheist, too. We had plenty of time to talk about how welcoming nontheists are of the LGBTQ community.

We also had the opportunity to reconnect with other nontheists who haven’t been attending our events. One of our past members popped in for a chat. Some of his friends prefer that he not attend atheist events, (an apparently not uncommon situation) but here we were and here he was so we had a brief opportunity to let him know we still care. We were able to extend a hearty invitation to those interested, answer questions of the curious, and demonstrate how normal and kind we are to those that noticed. Despite the stress of the religious fundamentalists, those that will pray for us and those who think it a bit proper that we should burn in hell, the connection with people who DO want to make a difference made me feel like I was making a difference by being there. Needless to say, we’ll be going back: Inland Empire CoR is HERE TO STAY! 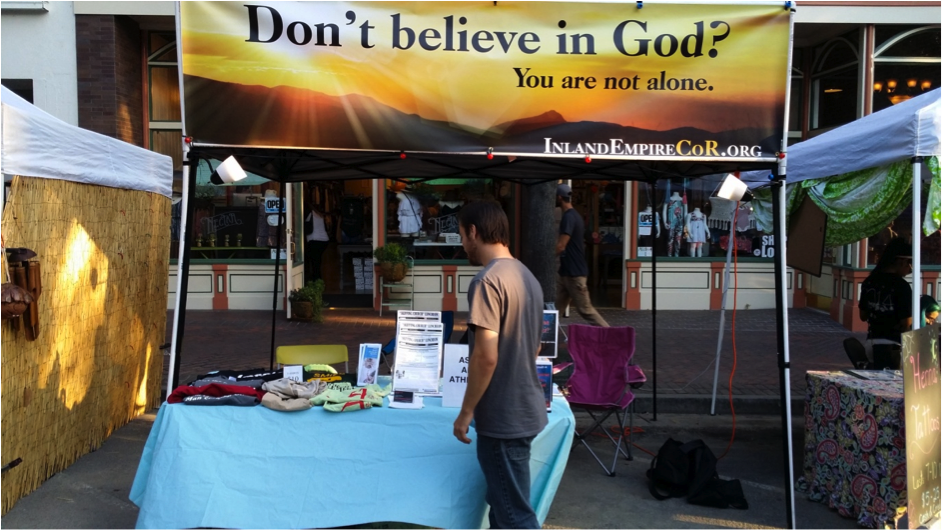