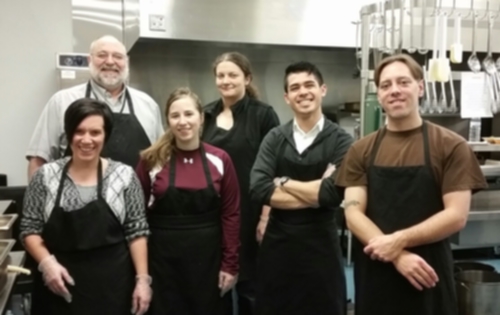 On Tuesday January 13, 2015 Central Ohio United Non-Theists (COUNT) held their first volunteer event at the Van Buren Drive homeless shelter. Some of the six volunteers made over 200 lunches while others served hot meals to guests. Several of the COUNT members celebrated with drinks/dinner afterwards at the Omnipresent Atheists meeting already in progress.

The shelter is run by the Community Shelter Board, the YMCA and other agencies and supports over 300 of Central Ohio’s homeless men, women, and children. Serving meals to the homeless at the shelter will be a recurring monthly group effort in hopes of making an impact on the lives of those in need here in Central Ohio. All volunteer hours will be reported to the Beyond Belief Network. COUNT members do charity while showing that we can do great things without God and invite any interested Columbus CoR members to participate. Sign up for the February 3rd or February 17th events or contact Christina McDuffie at (614) 205-3729 for more details.