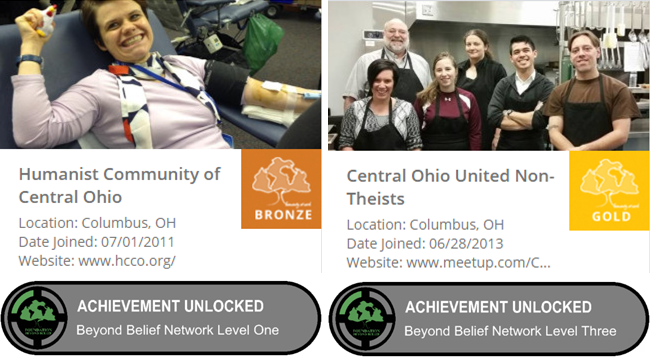 The Foundation Beyond Belief notified two Columbus CoR groups yesterday that they had been awarded new 2017 levels as Beyond Belief Network (BBN) teams. The Humanist Community of Central Ohio (HCCO) was granted level one/Bronze for 2017 for already reporting at least four service events this year. Central Ohio United Non-Theists (COUNT) was granted level three/Gold for exceeding twelve events. Both groups reached Gold status in 2016 and COUNT achieved Gold in 2014 and 2015.

COUNT is the second BBN team to reach Gold in 2017 with South Texas Atheists for Reason (STAR) as the first. Three teams have Silver status currently and HCCO is one of only six at Bronze. There are currently 133 teams in the BBN, including two other Columbus CoR groups Mid-Ohio Atheists (MOA) and Secular Student Alliance (SSA) at The Ohio State University (OSU) and a Friend of Columbus CoR, Freethought Dayton.

HCCO partnered with COUNT at four 2nd Tuesday events this year at the Van Buren Drive shelter (RSVP for 5/9 with COUNT or HCCO) with SSA at OSU members joining in for the April event. COUNT and HCCO members donated at two 3rd Thursday Columbus CoR Bleed-N-Feed events at the Carriage Place Red Cross (RSVP for 5/18 with HCCO or COUNT). Other 2017 events contributing to these levels included: a COUNT Day of Reason Proclamation request project, an April HCCO tree planting and four 1st Sunday COUNT events helping at the Columbus Ronald McDonald House (RSVP for 5/7).

COUNT, COGA, HCCO, MOA, OA and SSA at OSU are members of the Columbus Coalition of Reason (http://ColumbusCoR.org). Freethought Dayton is a Friend of Columbus CoR.