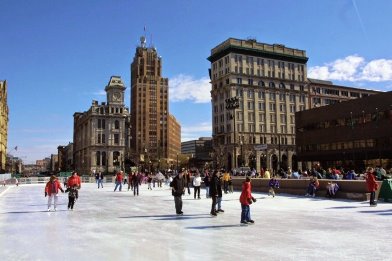 On July 17, we met with seven eager cooperating group leaders in a small restaurant in Liverpool, NY to plan for the launch of a new local CoR in Syracuse: Central New York CoR. Little did we know that this meeting would be the catalyst for a fast-moving local coalition that would launch on October 14 with a series of events that would last for eleven days. In-between social events, Central New York CoR helped raise 500 pounds of food for a local food bank, sponsored a “Bleed and Feed” donation to the blood bank which was followed by dinner, and hosted A Better Life: An Exploration of Joy & Meaning in a World Without God. UnitedCoR’s Executive Director also came to speak at one of their events and helped provide additional publicity through advertising in local newspapers as well as Google AdWords.

Corrina Allen—Central New York CoR Coordinator—and her team of volunteers have consistently used a rolling plan of connecting MeetUp pages with their CoR’s website, thereby increasing visibility and attendance at their meetings. Not only have they advertised two local events each month since the CoR’s launch, they have already started to plan and advertise for January 2016, reaching out to attract families with children for a special day of ice skating on January 10th, and a book discussion event on the 24th. Central New York CoR has already been making plans for attending the Reason Rally, and has started booking their bus transport.

Congratulations to Central New York CoR—our CoR of the Quarter!