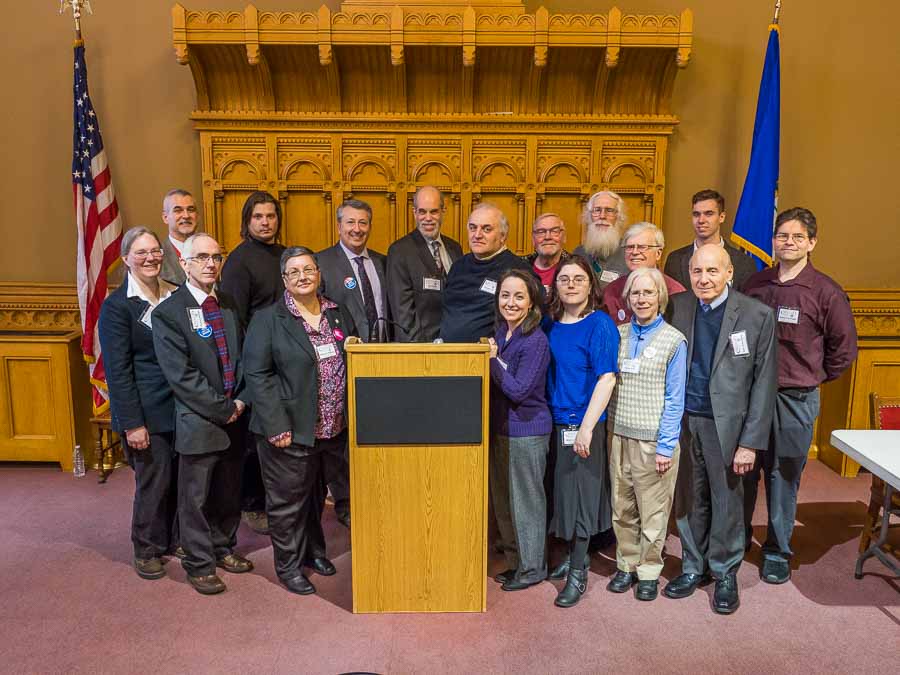 The Secular Coalition for Connecticut (SCCT) organized its first Lobby Day at the Capitol in Hartford on Monday, March 13th. Know as “Secular Advocacy Day” the event attracted both Connecticut Coalition of Reason members and non members to the State Capitol to lobby on behalf of Connecticut’s large nonreligious population for three bills: Aid in Dying, Standardization of Oaths, and Patient’s Right to Know.

Aid in Dying – Has been introduced into the Connecticut General Assembly (CGA) for the last 4 years. In prior years the driving force behind Aid in Dying in Connecticut has been Compassion & Choices, an organization that has been lobbying for Aid in Dying laws in many states throughout the country. However, this year Compassion & Choices opted to redeploy their resources to other states rather than fight an uphill battle since the CGA moved closer to the right after the last election. Regardless the bill was introduced by Public Health Committee co-chair Representative Jonathan Steinberg. The SCCT legislative leads Sarah Hambrick and Hartford Area Humanists President Stan Greenberg had their work cut out for them. As of this writing it is unclear if the bill will move beyond the Public Health Committee.

Standardization of Oaths – SCCT legislative leads Dan Blinn and Luther Weeks almost got Standardization of Oaths introduced last year, but somehow the sponsor missed the deadline. With another year under their belts this bill was introduced by Senator Steve Cassano, had a great public hearing, and was voted by the Government Administration & Elections Committee to be drafted by a margin of 13 to 4. The ACLU of Connecticut offered testimony if favor of this bill. The bill itself is rather simple. Of all the Oaths in CT (e.g., for taking office, for jury duty, for becoming a notary public, etc.) most of them allow the oath taker to swear to god OR affirm under penalty of perjury as the case may be. However, there are a handful where you can only wear to god. This bill would require all of the oaths in CT to standardize on former case.

Patient’s Right to Know – Was brought to the SCCT’s attention in April of 2016 at the CARE Conference by Amanda Knief. Amanda, as our readers know, is the National Legal and Public Policy Director for American Atheists and was one of the conferences highlighted speakers. Most, if not all, of the conference attendees were surprised to learn that it is legal for health care providers to withhold standard treatments and services if they conflict with the provider’s “sincerely held beliefs.” For example, Doctors practicing at Catholic-owned hospitals have to follow the medical directives set forth by the US Conference of Catholic Bishops instead of established scientific and medical norms. The problem is these organizations do not disclose this to their patients. We find this this practice to be unacceptable, unethical, and dangerous. This bill would require religiously-affiliated medical providers to disclose this information to patients so that the patient can make informed decisions about where to seek care. Those in need of help should never have other’s religious beliefs imposed on them. The bill was introduced by the Public Health Committee, was cosponsored by Representative Joseph P. Gresko, and had a public hearing where most of the testimony was in favor. There has been no vote by the Public Health Committee as of this writing. SCCT legislative lead and President of the Humanists & Freethinkers of Fairfield County, Cary Shaw, has done the lion’s share of the heavy lifting to get this bill introduced and supported.

A bright spot during the planning and organizing of the day was the discovery that Representative Josh Elliott is an open agnostic atheist. After a few email conversations he quickly cosponsored all three of our bills. The SCCT looks forward to working with him and supporting him in the future.

The day itself was described as masterfully planned and a smashing success. The day kicked off in the Private Dining Room of the Legislative Office Building with a free continental breakfast where attendees to could mingle and get to know one another as well as interact with any of the State Legislators or Aides that were present. Former CT CoR co-chair and current chair of SCCT, Pat McCann, kicked off the day with some opening remarks about the nonreligious community in CT. Pat was followed by Luther Weeks (Oaths), Stan Greenberg (Aid in Dying), and Cary Shaw (Patient’s Right to Know) who gave brief and impactful comments on their bills.

After breakfast the 28 attendees made their way to the Old Judiciary Room of the Capitol Building, which would serve as the base of operations for the day. Amanda Knief, author of “The Citizen Lobbyist: A How-to Manual for Making Your Voice Heard in Government,” was on hand to train the attendees in how to successfully lobby their state legislators. After lunch the attendees filtered out throughout the building meeting with their legislators, discussing our issues, and leaving behind material that they could refer back to. Although not all legislators were keen on our bills, most everyone said that their legislators were open to listening.

The feedback on the day was very positive. People said the time off from work was well spent; they enjoyed interacting with their legislators and felt they learned a great deal about the legislative process.

We plan on sacrificing a few beers in the hopes that our bills make it into law and will update this article as things change.