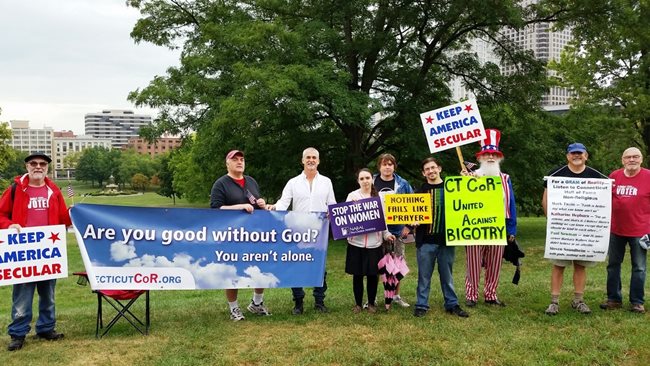 As the rain poured on the night of Wednesday, August 31st, part of me thought that Franklin Graham’s Decision America 2016 stop in Hartford, Connecticut would be a wash-out. The Facebook event that was posted by the Connecticut Coalition of Reason provided information that they’d been informed Graham would attract around 30 to 50 attendees, and so with the inclement weather, we anticipated a small gathering, perhaps that we would outnumber the attendees.

We were wrong…the local news reported over 1,000 people!

As we made our way with Pat McCann to the area that we were allowed to stand and protest, I remembered that we’d heard reports from Iowa that when their members protested Graham’s show, the event organizers tried to chase them away, and yet one lone Iowa protestor stood his ground and exercised his right to assemble and free speech. As we walked around the Connecticut capitol building, teams of volunteers for the event were directing foot traffic, and were busy handing out religious literature, American flags, Christian flags, little bottles of water and snacks. I politely declined to accept a Christian flag from a volunteer and was given the most unusual look from them; although I took an American flag, it seemed as if I wasn’t falling in line with their expectation. 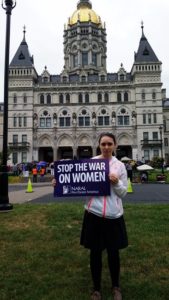 Once the Connecticut CoR volunteers set up their protest before the rally, a few people passed by. For the first ten minutes with Connecticut CoR’s banner on prominent display, few people took notice of its message. However, as the crowds began to assemble, more people noticed the banner (and Dean Anthony’s “Nothing Fails Like Prayer” sign), and the reactions became notably different. Some people stood and stared at the protestors, others shook their heads, many people took photographs, and a few came to implore us to repent and even offered to pray for us. Even after one person came and offered a personalized prayer on his knees for the group in front of the banner, upon his conclusion, Pat replied, “I’m still an atheist!”

Even fewer people decided to come and have a conversation with us, and for those who did, I’ll admit that they were polite and seemed to truly want a dialogue with us. The main question that was asked tended to be, “Why are you here?” In such situations, certain people and personalities tend to stick out in your memory. I remember speaking with two young Evangelical pastors. One of them tried to engage me with theological discussions on how their view of god’s transcendence led them to agree with Franklin Graham that America is falling away from the will of god and that, as a result, its decisions and leaders are becoming increasingly immoral. They recalled to me how Graham’s father, “Billy” Graham, was a man of courage and leadership, calling out to people to repent and turn to salvation. I asked them if they felt betrayed by Billy Graham’s later theology—bordering heterodoxy—that he announced on Robert Schuller’s famed Hour of Power. Apparently, they hadn’t seen that broadcast, and when I encouraged them to look it up for themselves on YouTube, one of them asked me, “What difference would it make?” What difference would it make??—for a former evangelist to state that “I don’t think that we’re going to see a great sweeping revival that will turn the whole world to Christ at anytime…that’s what god is doing today: he’s calling people out of the world for his name whether they come from the Muslim world, or the Buddhist world, or the Christian world, or the non-believing world, they are members of the body of Christ”? If Billy Graham truly believed what he said, his views were far more inclusive than the ones his son espoused in Connecticut.

Another person came and asked me the “Why are you here?” question. He was wearing a bright orange coat that had the word “Chaplain” written across the back, and he identified himself with the Rapid Response Team (as he offered me another granola bar…we noticed that the nontheistic protestors were offered food and water more often than the attendees). I said to him, “I’m a chaplain, too” and we began to discuss the kinds of things that he did as a chaplain. He mentioned to me that some of his friends were working with FEMA, and were waiting to be deployed to Florida, as Hurricane Hermine was building strength in the Gulf of Mexico. During his recollection of the food that his friends and colleagues donated, emergency packages that they distributed, homes cleared and sometimes rebuilt for local residents, the topic of prayer arose as he pointed to Dean’s yellow sign. “We also have prayers when we participate in these relief efforts,” he told me. “I don’t understand, though, why we’ve been asked to not pray with people. I think that Graham is right that our government is trying to stop us from feeling like we can be a Christian in public.”

It was ironic that the chaplain mentioned this point, as I could hear Graham in the background talking in general terms about “religious liberty” and some interesting interpretations on early Colonial American history. I asked the chaplain what he understood about modern American religious pluralism, and where it came from. He indicated that he’d attended over 40 of Graham’s talks on the tour, and that he had heard him speak of religious liberty on many occasions. “Aren’t you getting tired of hearing the same speakers talk about the same topic? Don’t you want to hear something new?” I asked the chaplain. He responded that he wasn’t tired of hearing the inspirational stories of how many colonists fled Great Britain in search of a new home where they could worship as they pleased. The point that I continued to raise with the chaplain is that, the colony to Connecticut’s east—Rhode Island—was where everyone could truly find religious liberty, thanks to Roger Williams’ vision and work. I also mentioned to the chaplain that sectarian prayers being offered by public funding is something that non-theistic people have an issue with, especially if tax money has been spent to support religious work. “But, what about my right to free speech about Jesus?” was the chaplain’s counter-question. “What if your prayer was something that offended another person’s religious beliefs?” was my reply. “Ok, other than atheists, who else might be offended by it?” asked the chaplain. “How about our Jewish friends? Remember when Billy Graham had to apologize?” I asked. “No, I don’t. And the Jews need to accept Jesus as their savior, too, because we know the Bible says…” said the chaplain. We were clearly at an en-passé, but we parted company as friends.

Near the end of the protest, I was visited by a kind and articulate gentleman named John Donovan who had driven quite some distance to attend Graham’s event. He was a Vietnam veteran with an honorable and distinctive service, and his father played a significant role in the negotiation for the release of the American pilot in the “U-2 incident”. In fact, the main character in Spielberg’s movie, Bridge of Spies was a portrayal of his father. After discussing a few things with me, John gave me a print-out of his article, and on the back of the article was a personal letter that he had written to Franklin Graham. “I think you need to read this more than Graham does,” John told me. I kept this letter, because I think that John answered his own question of “Why are you here?”:

THE MOST IMPORTANT DECISION FOR AMERICA NOW

The biggest decision Christians in America could make now-in this age of cultural pandemonium-is to focus more intensively on moral regeneration at the local level. What the laws dictate isn’t unimportant, but politics and policies tend to be reflective of deeper cultural conditions.

Religion is at the center of culture, and it is only the power of prayer-organized and persevering-that will create an authentic breakthrough toward a culture of character. The problem now is that the social ills affecting our nation are fully reflected in the part of our population that calls itself Christian. A true community of mutual spiritual influence must now be developed and become militantly influential.

Militantly influential? Is this a declaration of warfare? Who are the allies and who are the enemies? What is the intended outcome and on what terms will it stop? From what Donovan wrote, and given Graham’s Evangelical-centric message, it appears that being inclusive is not on the agenda, and certainly is not what Graham is well-paid to advocate. Although Graham avoided an outright endorsement of any political candidate or party, one thing he was clear about was that he felt that Christians must be elected to any and all public office such as mayors, school boards, and especially to be appointed the Supreme Court. Books, education and public policies were high on Graham’s list of indoctrination to promote his view of “Biblical values” that proclaimed secularism is communism, that “progressives are the same as atheists,” and that his views stood in stark opposition to “the nation’s sins — abortion, same-sex marriage and an entertainment industry that glorifies sex and violence.”

If a rally that closely resembled a tent revival meeting can be held on the steps of a state Capitol, then we found our reason for why we were there. But, we were not alone with our protest that day, although we were not allowed to be anywhere near the crowd. At the very back of the crowd stood two clergy members of the Metropolitan Community Church of Hartford, proudly waving the rainbow flag. Rev. Aaron Miller made it explicitly clear that Graham’s “brand” of Christianity was divisive and that it led to people feeling broken, useless and second-class, rather than being inclusive. Graham’s views of isolationist Christianity not only divides between believers and non-believers, religions against religions, but he is also preparing to divide the Christian community against itself. As a result from this polarization, perhaps now is the time for non-theistic communities to make new friends and community partners with others—like the MCC—who disagree with this agenda and message.