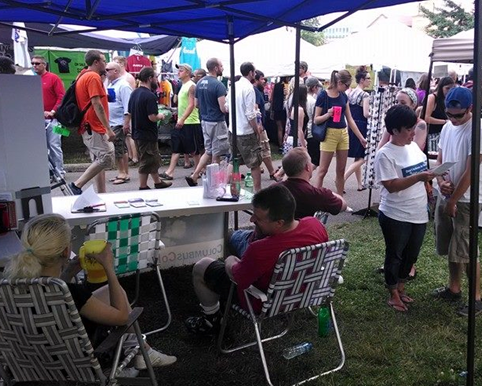 Dedicated volunteers made Columbus CoR's first time tabling at the June 27 – 29 Columbus Community Festival successful. 23 volunteers worked a total of 107 hours setting up the booth, tabling and helping with cleanup, recycling and security. Many of the Columbus CoR member groups provided volunteers. Central Ohio United Non-Theists (COUNT) supplied the most volunteers closely followed by Omnipresent Atheists (who worked the most hours), Humanist Community of Central Ohio (who also had their own booth), and Atheists of Columbus.

Many passing by the booth gave a thumbs to the large “Don’t believe in God? Join the club!” banner. 70 attendees signed up on an e mail list to recieve more information about Columbus CoR groups. Although most feedback was positive and the event was largely peaceful, some drama ensued late Saturday when police tackled a fleeing suspect atop a table in the booth. A police officer was said to have injured his shoulder in the melee and a table was slightly damaged.

Christina McDuffie hosted a COUNT meeting attended by five members who worked a total of 20 hours to plan the booth and produce signage. Avery Winston, Columbus CoR Coordinator, led the overall effort including recruiting/scheduling volunteers and working with United Coalition of Reason, who paid for the canopy, banner, booth fees and other expenses. Dan Hronek loaned us tables – sorry about the bent leg, Dan!