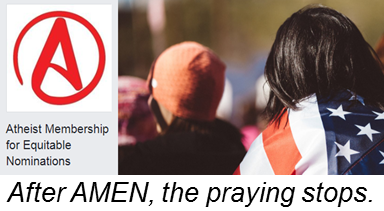 Atheist Membership for Equitable Nominations (AMEN), founded this Fall, is working toward the acceptance of atheists and nonreligious persons into society and government and holds representatives accountable to the growing non-religious demographic. AMEN is the first Columbus CoR group with a primary focus on activism.

AMEN holds that:
1. Atheists and religious nones should be accepted into every social and political arena without having their morals or humanity called into question.
2. Every local or federal electoral candidate should take the freedoms, requirements, and worldviews of atheist Americans into account.
3. Atheists should be able to run openly for government without it affecting their chances of winning.

AMEN welcomes all political leanings, genders, orientations, races, and worldviews. “If you are an atheist committed to bringing about nonreligious equity to American politics, you are part of the family!” says Organizer Vi La Bianca.

AMEN held their first meeting on November 1 and already has 22 members. RSVP for the next meeting on December 12th.