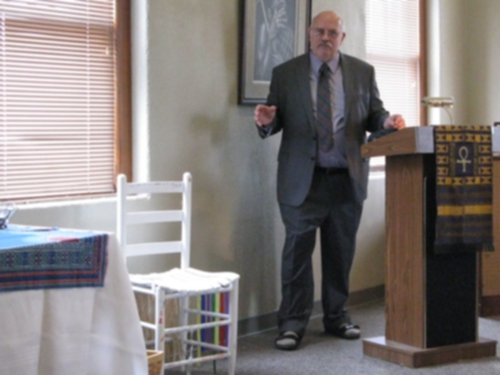 Clinton Wiles from the Drug Policy Reform Network of Oklahoma spoke about the War on Drugs at the Church of the Restoration (COTR) in Tulsa, Oklahoma. COTR is a congregation that is associated with the Unitarian Universalist Association.

Clinton Wiles is from Oklahoma City and is a member of the Humanists of Central Oklahoma.

Dan Nerren, a member of COTR and the Humanist Association of Tulsa (HAT), introduced the speaker Wiles to the congregation.

Wiles asserted that the War on Drugs has been lost.

Wiles also argued that legalized drugs are more effectively controlled than illegal drugs; and that the destructive behaviors resulting from the abuse of drugs can be criminalized rather than the drugs themselves. Wiles explained that while alcohol is legal, drunk driving is illegal.