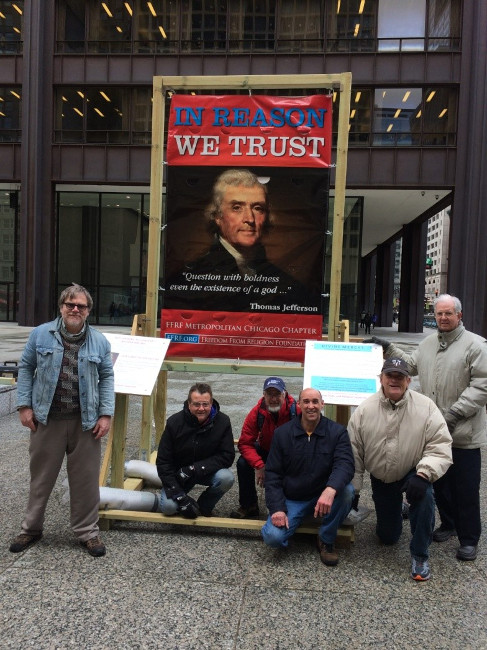 On Thursday, April 13th, the Freedom From Religion Foundation—Metropolitan Chicago Chapter (FFRFMCC) with its member volunteers erected our protest of a Catholic prayer shrine which goes up each year during the Christian “holy week” by the Divine Mercy Project at Chicago’s Daley Center Plaza. The shrine includes a large wooden Latin cross, a 9-foot banner of Jesus, and “kneelers” for people to pray, also went up on Thursday. In past years, Catholic supporters have also held 24-hour prayer vigils, distributed thousands of prayer cards and hosted anti-abortion rallies in front of the Jesus painting.

This is the 4th year of the FFRF display which features two large banners with images and secular quotes from founding fathers John Adams and Thomas Jefferson. The banner stand also includes four smaller lectern signs. One asks all citizens to speak out against religious use of government property. The other questions the “divine mercy” of the New Testament, on which Christianity is predicated, and exemplifies the obvious conflict between Biblical and Constitutional principles.

The objective of our display is a call to maintain the wall of separation between state and religion, particularly in cases where organizations like the Divine Mercy Project, created by the Catholic legal organization called the Thomas More Society, use secular taxpayer property in an attempt to convert others to their religion. This is a use of public property that all citizens, even those of religious faith, should discourage.

The FFRF display will be up through Saturday, April 22nd, and so we welcome any visitor to the Chicagoland area to stop by and see our display.